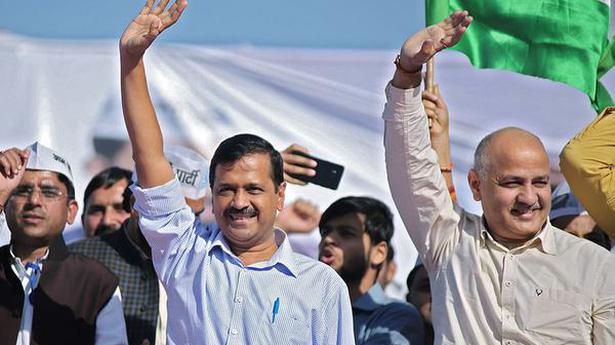 A Delhi court on Wednesday stayed the non-bailable warrants, which were issued against Chief Minister Arvind Kejriwal, his deputy Manish Sisodia and Swaraj India president Yogendra Yadav after they had failed to appear before it in a criminal defamation complaint filed in 2013.

Additional Chief Metropolitan Magistrate Samar Vishal passed the order after lawyers for the three leaders sought cancellation of the NBWs.

The court said it will take up the main matter on April 29.

Complainant advocate Surender Kumar Sharma has alleged in his complaint that in 2013 he was approached by volunteers of Aam Aadmi Party who had asked him to contest the Delhi Assembly elections on a party ticket, saying Kejriwal was pleased with his social services. He filled up the application form to contest the polls after being told by Sisodia and Yadav that AAP’s Political Affairs Committee had decided to give him the ticket.

However, it was later denied to him.

On October 14, 2013, the complainant claimed that articles in leading newspapers carried “defamatory, unlawful and derogatory words used by the accused persons” which have lowered his reputation in the Bar and the society.

Opposing the complaint, the AAP leaders had submitted that cancellation or allotment of an election ticket is the prerogative of the party and the complainant had not divulged correct information as to the cases pending against him.

On the basis of the complaint, the trial court had earlier sought their presence before it in the matter.

It had, however, granted bail to Mr. Kejriwal, Mr. Sisodia and M r. Yadav after they had appeared before it in pursuance to summonses against them.

The summonses were issued on the complaint under sections 499, 500 (defamation) and 34 (common intention) of the IPC, with the trial court saying there was prima facie material to summon the accused.

Chief Minister B.S. Yediyurappa has established the ‘Chief Minister Relief Fund COVID-19’ and appealed to interested persons to transfer funds online for helping the needy and for providing better healthcare. He has appealed to people to donate funds on humanitarian grounds for the noble cause of providing healthcare services. Contribution to the relief fund can […]

Through mobilisation of locally available resources in a shrewd manner, this school development monitoring committee (SDMC) of the government higher primary school in Kendalabailu village in Tirthahalli taluk is providing free face masks for those in the forefront of the battle against COVID-19. SDMC president Nithyananda told The Hindu that after the lockdown was enforced […]

Sonia Gandhi wishes all on occasion of Id