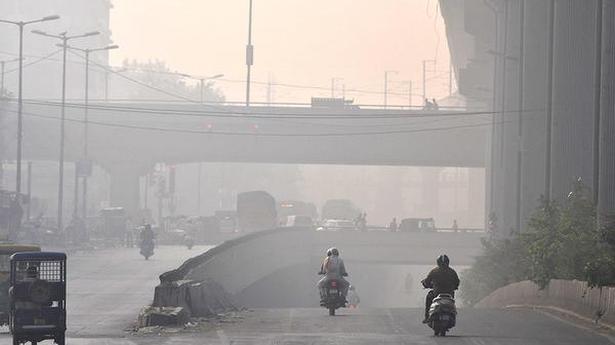 Ahead of the Graded Response Action Plan that is scheduled to kick-in on October 15 to check rising air pollution in the Capital, Chief Minister Arvind Kejriwal said all the gains achieved so far to combat pollution would be nullified if neighbouring States do not stop crop burning.

On a day when several monitoring stations across the city showed the Air Quality Index as “very poor”, Mr. Kejriwal tweeted: “All the gains achieved so far on pollution front will be nullified. Whereas, we need to do a lot in Delhi and we are trying, however, all governments and all agencies need to work to stop crop burning also (sic).”

A political blame game also played out in the city as AAP Rajya Sabha MP Sanjay Singh hit out at the Centre, saying it has been caught napping. “I want to tell the BJP that it is time to stop the drama and theatrics. Your Central government has been caught napping at the wheel once again. Tell the Center to stop crop burning in Haryana and Punjab. That will reduce pollution, not your gimmicks,” he said responding to an event organised in the city where Delhi BJP chief Manoj Tiwari distributed masks.

Sources at the Meteorological Department said smoke from crop residue burning in neighbouring States had stated reaching Delhi and was not getting dispersed due to calm winds creating a haze over Delhi.

On Sunday evening, Delhi average AQI based on 36 monitoring stations was measured at 270 which was in the “poor” category. Ghaziabad, Greater Noida and Noida were in the “very poor” category with an AQI of 320, 301 and 310 respectively, according to Central Pollution Control Board data.

The Centre-run System of Air Quality and Weather Forecasting and Research said smoke from stubble burning will make up 6% of Delhi’s pollution by October 15, when the GRAP comes into force in Delhi-NCR.

Despite a ban on stubble burning in Punjab and Haryana, farmers continue to defy it and pollution monitoring bodies have shown that Punjab has reported a 45% increase in crop residue cases till October 11 while Haryana has shown a slight decrease.

The Communist Party of India (CPI) state headquarters situated in Vaiyyalikaval area in Bengaluru was attacked in the wee hours of Wednesday by a group of men who set fire to six bikes parked on the office premises. There was a family of four adults, two children, along with five youth activists and students staying […]

A protest by employees of a textile company in Hassan, alleging harassment by the senior executives, turned violent here on Wednesday. Many vehicles including a police van were damaged when the protesters threw stones in retaliation to police lathi-charge. The workers of Himatsinghka Linens in Hassan began the protest around 10:00 a.m., alleging that the […]

Even as two senior ministers in the Maharashtra government have expressed divergent views on providing free electricity to people who consume up to 100 units of power, city-based economist H.M. Desarda on Wednesday supported the feasibility of such a measure on the lines of the one in Delhi. State Power Minister Nitin Raut had last […]