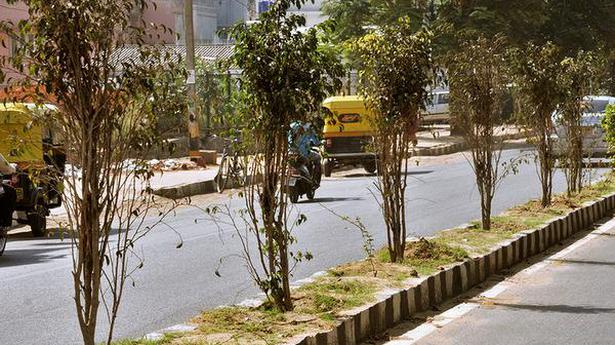 A majority of government departments fall woefully short in implementing programmes and policies that encourage sustainable development and mitigate effects of climate change.

The State-run research centre, Environmental Management Policy & Research Institute (EMPRI), analysed the budgets for 10 major departments to study their expenditure on “green components”. The Green Budget report, a first-of-its-kind in the country, shows the Public Works Department, which has one of the biggest outlays in the State government, spends barely 4% of its budget for mitigation, while at least seven major departments spend less than a third of their budget for environmentally-sustainable programmes. EMPRI compared sector-wise allocations of the budget for the financial year 2017-18, with over 200 action points and 31 priority actions detailed in the Karnataka State Action Plan on Climate Change (KSAPCC) that was developed in 2015.

The green budget statement, released by EMPRI earlier this year, aims at encouraging environmental sustainability among government departments, as well as planning for future budgets to meet the goals set at the Conference of the Parties (COP21) in Paris, December 2015.

While government departments have spent ₹9,477 crore cumulatively on “green components” listed in the KSAPCC — or, around 26% of the total allocation to these departments — EMPRI believes spending needs to increase by nearly ₹4,000 crore to achieve the targets set for 2020. “This is only an initial report and we are working out a system to develop green indicators for government programmes. For instance, programmes with a higher green component will be given 5 stars, and the lower the green component, the lower the star rating. We hope that this grading system will encourage policy makers to increase spending on green projects,” said Ritu Kakkar, Director-General, EMPRI.

While the report was released just before the 2019-20 budget, EMPRI hopes that the second version of the report will find some influence in the budget to be presented in 2020. “In three years, we were happy to see that most of the action points mentioned in the State climate change action plan has been adopted by State government departments. Now, we hope to increase focus on their implementation,” said Ms. Kakkar.

Each sector has a different standard for green expenditures. For the PWD, the report suggests that it increase its expenditure to 14% of total budget (₹500 crore additional expenditure), which should include groundwater recharge along roads; planting of 200 trees per km of road built; and use of plastic waste in road construction.

Agriculture and allied activities as well as the fisheries sector have the highest shortfall in expenditure — to the tune of 20 percentage points or over ₹1,500 crore additional expenditure — with EMPRI pointing out they are yet to implement 16 recommendations of the 69 action plans mentioned in the State’s climate change plans. These include conservation of indigenous crop varieties; development of pasture land, expansion of mangroves, and research on increasing pests as well as effects of climate change on the State’s coastlines.

Water conservation remains a recurring theme in action plans for the State government. The Water Resources Department has been asked to look at Rajasthan’s Mukhyamantri Jal Swavalamban Abhiyan, which encourages community-participation in water conservation as well as Odisha’s Pani Panchayat Acts, a participatory irrigation management programme.

Similarly, EMPRI has recommended that the Urban Development Department — which has a higher proportion of green components due to its spending on sanitation, drinking water and public transportation systems — implement rainwater harvesting in towns apart from Bengaluru, adopt desalination of saline water, and reduction of unaccounted flow of water in drinking water systems.

Anxious family members of a Nagapattinam youth employed at the ceramic factory in Sudanese capital Khartoum where many had died in a LPG tanker blast on Wednesday have pinned their hopes on the Central and State governments for authentic information about the victims and survivors. Family members of Ramakrishnan, 26, of Alangudicheri near Thittacheri have […]

There was tension in Kudchi village on Tuesday after some residents staged a dharna in front of the police station stating that ASHAs were heckled by the family members of suspected COVID-19 patients. Sangappa Patil, one of the protesters, told the police that some residents had pushed around ASHAs and insulted and abused them, as […]