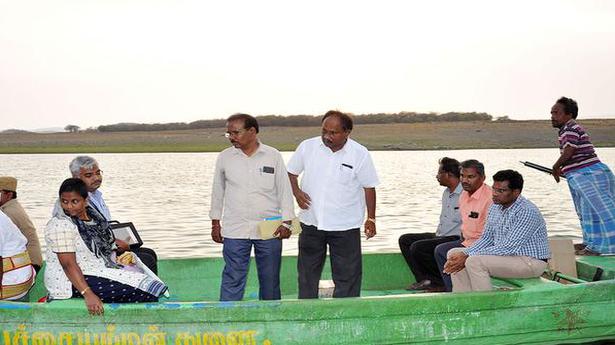 The mysterious death of fishes in the Sathanur dam in Tiruvannamalai district in the past two days led to a survey by officials from the Tamil Nadu Fisheries Development Corporation (TNFDC), the PWD and the Tamil Nadu Pollution Control Board.

After noticing the fishes that were washed ashore on Friday, fishermen alerted the authorities of the Tamil Nadu Fisheries Development Corporation (TNFDC). An official team rushed to the spot.

District Collector, K.S. Kandasamy after assessing the situation said that it was not alarming.

The Fisheries Department in its report claimed that the death could have been triggered by squally winds blowing over the past few days resulting in excessive silt getting deposited on the dam bed. The report submitted to the Collector by the TNFDC said water evaporation and heat wave conditions in the district for the past few days might have reduced the required oxygen levels. This would have led to the death of fishes in large numbers, the report said.

Fish samples have been sent to Chennai for a study and the Pollution Control Board has sent water samples for testing. Reports are awaited from both agencies, PWD officials in charge of the dam said.

After the murder of two fishermen by a group of poachers who resorted to illegal fishing in the dam bed, the officials have been patrolling the area with police protection.

Amid fears that another cyclone could approach the Odisha coast by the weekend, the Bhubaneswar Meteorological Centre of IMD on Monday said a low pressure area has formed over north Andaman Sea and is likely to become a well marked low pressure area over the next 12 hours. “Under the influence of yesterday’s cyclonic circulation […]

The Naxal Special Division and the Special Task Force (STF) of the Tamil Nadu Police tightened security along the border with Kerala in the Nilgiris and Coimbatore, and carried out combing operations on Thursday, after an alleged Maoist, C.P. Jaleel, was killed in a gunfight with Kerala Police’s anti-Maoist force, Thunderbolt, on the premises of […]