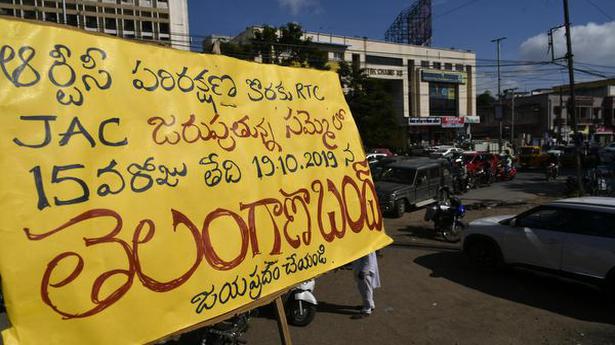 JAC leader K. Raji Reddy said that the string of detentions began early in the morning near the Hayatnagar Depot and continued across the State. JAC leader Mohammed Hidayat Ali and others were detained near the Rajendranagar bus depot.

To tackle any untoward incidents, security was beefed up at the Jubilee Bus Station and the Mahatma Gandhi Bus Station – both of which wore a deserted look, with few buses arriving and departing from the otherwise busy facility. The situation was similar at Farooq Nagar and Mehdipatnam bus depots where dozens of workers were detained.

“The Chief Minister has not spoken to the workers so far. Is this democracy or autocracy?” Dr. Laxman said.

Left parties too joined the protests.

Students staged a protest at the Osmania University, once the hotbed of dissent during the Telangana agitation. Slogans of ‘Khabardaar, KCR’ and ‘KCR, down, down’ echoed at parts of the campus.

Incidents of TSRTC staff allegedly assaulting temporary drivers of buses were reported near the Parade Grounds Metro Station. A temporary driver of the Hayatnagar-2 bus depot, identified as Swamy, said that he was assaulted by a TSRTC employee. “He climbed into the bus and hit me hard,” Mr. Swamy said. Police soon arrived at the spot and detained the TSRTC employee.

A police official patrolling the Parade Grounds said that a bus driver on his way to the city from Gajwel said that he was assaulted by TSTRC staff.

While buses stayed off the roads, autorickshaws and cabs plied the roads, and were largely unaffected by the bandh call.

The effect of the bandh in several districts was palpable, with protests breaking out in Khammam, Medak and Sangareddy, among others. Several business establishments were closed on account of the shutdown.

In a statement released to the media,TSRTC JAC leader Thomas Reddy thanked all those who supported the band and declared it a success. He demanded that all those who had either been arrested or detained be released immediately. “We condemn the arrests. This is a democracy. We will announce our future plan of action in the evening,” Mr Reddy said.

The National Human Rights Commission on Tuesday said it had started a Twitter account to boost awareness on human rights. The Twitter handle — @IndiaNhrc — is not a platform to register complaints of human rights violation, the panel said. “The occasion marks a step toward increasing awareness amongst citizens about human rights and the […]

IIT Mumbai professor S.G. Srinivasa Rao on Tuesday provided special training to the students of Sun School here, on the uses of solar energy, as part of Sun Shakti workshop. Explaining its benefits, Mr. Rao said that switching to use of solar energy at domestic level would not only lay the foundation to a sustainable […]

Post the incident at Janturayi village in the cut-off area of Andhra Odisha Border, in which a senior Maoist leader was stoned to death and another seriously injured by tribal people, the locals, braving the threat of retaliation from the banned outfit, have come out openly demanding development in their area. District Collector of Malkangiri, […]