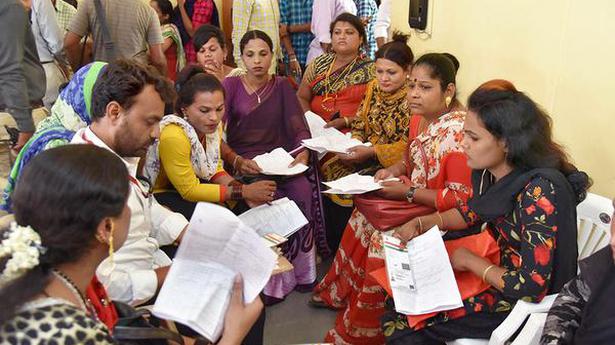 To encourage voters with disabilities, senior citizens, and sexuality minorities to exercise their franchise, the Dharwad district administration has taken up an extensive awareness programme and has also ensured that the requisite arrangements are made at polling stations.

Speaking at a voter awareness programme in Hubballi on Saturday, Deputy Commissioner of Dharwad Deepa Cholan said that all efforts were being made to motivate them to cast their votes by providing transport, wheelchairs, and other facilities.

Ms. Cholan said that efforts were being made to collect information regarding senior citizens and voters with disabilities in each of 1,872 polling stations in Dharwad Lok Sabha constituency.

Ramps will also be erected at the stations to help the voters with disabilities, she said.

She said for the persons with visual disabilities, EVMs will also be made Braille-compatible and those who did not know Braille would be allowed to take the help of an assistant at the station.

Prior to this, they will also be given information on how to exercise their franchise using a mock EVM, she said.

Ms. Cholan called on the former devadasis and sexual minorities to exercise their franchise and said that efforts are being made to motivate them.

In all, there are 13,450 voters with disabilities in the district and their enrollment in the voters list had been confirmed. The work on collecting information on sexuality minorities was on, she said.

Chairman of the District SVEEP Committee and Chief Executive Officer of Zilla Panchayat B.C. Satish said that while the first round of voter awareness programmes had been completed, the second round will be completed before the polling day.

Poll literacy clubs had been set up in schools and colleges and awareness was being created among young voters, he said.

Mr. Satish said that first-time voters were invited to take selfies individually or in group and send them to the SVEEP committee. The best among these selfies would be given prizes, he said.

Subsequently, sexuality minorities aired their grievances before the Deputy commissioner about the difficulty in getting their voter identity cards.

Ms. Cholan promised them the officer concerned would make a spot visit to confirm their address and then enroll them in the voters list. Assistant Commissioner Mohammad Zuber, Tahsildars Shashidhar Madyal and Sangappa Badagi and others were present.

Two weeks after they met in New York on the sidelines of the UN General Assembly, Prime Minister Narendra Modi has once again assured Bangladesh Prime Minister Sheikh Hasina on the issue of the National Register of Citizens in Assam, officials said, after a meeting between the two in Delhi on Saturday. They also discussed […]

Probably for first time in the history of the Assembly, Speaker Tammineni Seetharam registered his “protest” against the behaviour of the Opposition MLAs in the House. On Tuesday the Speaker left the House in a huff leaving everyone in the Assembly dumbfounded . He did not announce whether it was a break or adjournment. He […]

Talk about turning the tables on the opposition. If Narendra Modi managed to turn Mani Shankar Aiyar’s careless jibe about his being a chaiwala’ into a successful chai pe charcha’ campaign in 2014, this time the BJP is hoping to counter Congress president Rahul Gandhi’s chowkidar chor hai’ remark with a Main bhi chowkidar hoon’ […]