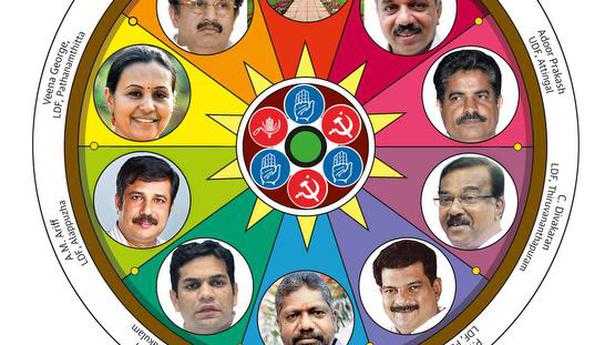 When the Congress picked K. Muraleedharan to take on Left Democratic Front candidate (LDF) and Communist Party of India (Marxist) veteran P. Jayarajan in the Vadakara constituency, he became the ninth MLA to be fielded by the two major fronts in the State for the coming Lok Sabha elections.

Ironically, a couple of days earlier Mr. Muraleedharan had criticised the LDF for fielding six of their MLAs to fight the Parliament elections, triggering a debate on the propriety of sitting MLAs contesting for the Lok Sabha poll.

The Bharatiya Janata Party was quick to accuse the fronts of attempting to play it safe fearing political setbacks and putting additional ‘burden on the exchequer’.

There is a strong view that the decision is dictated by the political need of both the fronts to garner maximum seats to keep the BJP away from power at the Centre. So they picked candidates who had fairly high winning prospects in each segment rather than experimenting with novices or even old-timers.

Added to this were the caste and community compulsions to be at play.

Fielding sitting MLAs and reaping success is in fact an old formula. Congress leaders K.C. Venugopal, K. Sudhakaran, and K.V. Thomas are some veterans who won the Lok Sabha election as sitting MLAs.

The issue of MLAs contesting Lok Sabha polls have withstood the legal test when the issue was settled by a High Court Bench comprising the then Chief Justice S.R. Bannurmath and Justice Kurian Joseph on a petition filed against the election of Mr. Venugopal, Mr. Thomas, and Mr. Sudhakaran to the Lok Sabha on April 8, 2009. The court dismissed the petition citing Article 10(1) of the Constitution – Prohibition of Simultaneous Membership Rules, 1950.

The rules say that “there is no bar on Members of Legislative Assemblies or Members of Parliament in contesting election to either of the offices while holding office in the other.” Election of the incumbents would necessitate byelections. The expense for holding an election in an Assembly segment has been pegged at ₹1 crore as per the official estimates drawn in 2014.

According to political commentator J. Prabhash, the expense for conducting a byelection in such situations is the cost incurred for maintaining a healthy democracy and it is inevitable. Since winning an election is quite significant for any political parties, it is well within their right to field a candidate of their choice, including an MLA.

“When leaders like Prime Minister Narendra Modi and Congress president Rahul Gandhi are contesting from more than one seat, there is nothing undemocratic in MLAs contesting the Lok Sabha polls. If cost is the sole concern, we will have to even think of doing away all elections,” Dr. Prabhash said.

Electrician Nandakumar, 22, of Ambur who was hit by a cricket bat by his friend Karthik, 23, on Monday evening died on Tuesday afternoon. Police sources said the victim and the accused were friends and had consumed liquor on Monday evening. While Nandakumar was playing cricket with his friends, Karthik who also happened to be […]

As trends for the Jharkhand Assembly elections showed the Congress-JMM alliance ahead of the ruling BJP, the NCP on Monday said people of Jharkhand have demolished the “arrogance” of Prime Minister Narendra Modi and the saffron party president Amit Shah. The Shiv Sena also hit out at the BJP, with which it recently severed ties […]

Several veterans entitled to disability pensions had a shock when they received just few hundred rupees in their bank accounts as pension for the month of February. This was due to an order by the Principal Controller of Defence Accounts (PCDA), Allahabad, to deduct tax on disability pensions despite assurances to the contrary by the […]