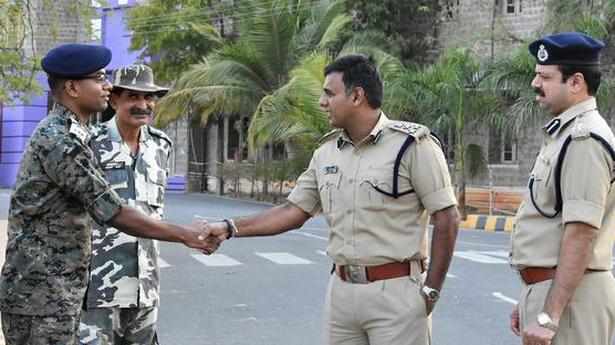 Deputy Inspector General of Police Kanthi Rana Tata and Superintendent of Police GVG Ashok Kumar on Wednesday reviewed the three-tier security provided to the strongrooms at the JNTU, Anantapur, and Sri Krishnadevaraya University.

The officials went to those locations and talked the CRPF and APSP personnel in-charge of the first two core layers of security.

They told reporters that was no need to have doubts over security as no unauthorised person was being allowed anywhere close to the strongrooms.

About some complaints that JNTU Vice-Chancellor was also not being allowed to go to certain buildings, Mr. Ashok Kumar said none could go anywhere near the ones that were taken into the control of the District Election Officer without authority of the Election Commission of India.

Expressing regret over the single incident of death during a clash at polling Booth No.197 at Veerapuram village despite deployment of armed reserve force and paramilitary forces as it was classified as ‘critical,’ Mr. Ashok Kumar said the police had gone to the house of Chinta Bhaskar Reddy twice to take him into custody as part of preventive arrest, but he had avoided it, otherwise he would have been alive today.

In all 36,834 persons were bound over, 290 cases of model code of conduct violations registered, and 68 cases under IPC registered all over Anantapur district and 400 of them put behind bars.

Dr. D. Ayyappa, former vice chancellor of Alliance University, was allegedly hacked to death on October 15 night. His body was discovered at HMT Ground in RT Nagar on October 16, around 6 am. According to the police, the victim had stepped out of his house for a walk after dinner at around 11.30 pm. […]

The Tamil Nadu unit of the BJP is likely to get a new president on Friday, four months after Tamilisai Soundararajan was appointed Governor of Telangana. Since September 2019, the top post has been lying vacant. Since then, leaders like former Union Minister Pon. Radhakrishnan, former MP C.P. Radhakrishnan, national secretary H. Raja and State […]

Support people by ration not by bhashan: Kapil Sibal

The Congress has once again attacked the government for the plight of the migrants and poor people, saying that they were suffering due to the nationwide lockdown. Party leader Kapil Sibal said on Thursday that the people could not be helped by mere lecturing. Mr. Sibal in a tweet said, “Our people ready to support […]