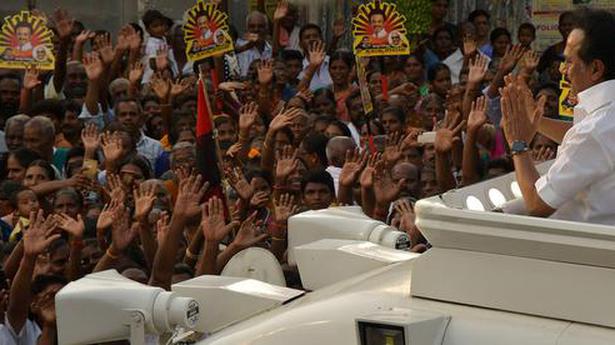 The DMK will sweep the byelections to 22 Assembly constituencies, and that would be enough for the party to form a government with the support of Congress and IUML MLAs, DMK president M.K. Stalin said here on Tuesday.

The days of the AIADMK rule were numbered as it would be reduced to a minority government once the election results are declared, he said.

Since the AIADMK was not sure of winning the byelections, the party had taken recourse to undemocratic and illegal routes to disqualify three dissident MLAs so as to show the magic number [in Assembly] to continue in office. But his swift action of moving a no-confidence motion against the Speaker had surprised the AIADMK and halted its plans, Mr. Stalin claimed.

The Supreme Court’s order staying the disqualification proceedings initiated by Speaker P. Dhanapal against three dissident MLAs had signalled the endgame of the AIADMK’s strategy to retain power. The AIADMK, however, would not hesitate to go to any extent to subvert the law to save the government, but it would not succeed, he said.

Canvassing for the DMK candidate for the byelection to Aravakurichi Assembly constituency, V. Senthil Balaji, at Thalavaipalayam on the outskirts of Karur, Mr. Stalin said the AIADMK, which had managed to hang on to power with the support of Prime Minister Narendra Modi, would not be able to save itself for much longer as “BJP is set to lose power”. The DMK-Congress alliance would score a massive victory in the parliamentary election, he predicted.

Mr. Senthil Balaji, who was elected for a five-year term, was a victim of vendetta politics. He was disqualified as an MLA for asking the Governor to remove Edappadi K. Palaniswami from the Chief Minister’s post for his “corrupt and anti-people” activities. Voters of Aravakurichi should teach the AIADMK a lesson by electing Mr. Balaji to the Assembly again, the DMK leader said.

Earlier, Mr. Stalin visited Pallapatti, a Muslim-dominated town panchayat in Aravakurichi constituency, and canvassed for Mr. Balaji. Walking on the streets of Pallapatti, Mr. Stalin met scores of women and listened to their grievances.

Opposition parties in Assam have joined wildlife and animal rights activists in opposing the bid to transport during the ongoing heatwave four juvenile elephants from the State to Gujarat for a religious procession. Wildlife officials in Assam —allegedly under “tremendous political pressure” — have been preparing to send the four elephants on a six-month lease […]

Liquor worth ₹8 crore sold in one day in Vizag

Despite a steep hike by yet another 50% price on liquor, hundreds continued to throng wine shops in the district on Tuesday. Officials said that liquo Source: thehindu.com Related