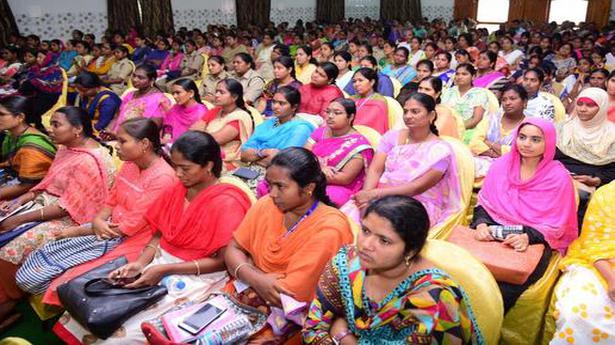 Many woman are suffering harassment silently and rise in attacks on women across the country is a major cause for concern, according to Civil Supplies Minister Kodali Sri Venkateswara Rao (Nani).

“Owing to social stigma and non-cooperation from the family members, woman are not coming forward to complain against the violence, torture and harassment. The government is ready to take action against those who harass woman and punish the accused severely,” said the Minister.

“Police will keep the details of the victims confidential and take action against the miscreants. There is no need for women to come to the stations and the victims can just lodge a complaint through ‘Disha App,” said Mr. Venkateswara Rao.

Mr. Khan, while explaining the incident in an APSRTC bus and the response of the police for the complaint lodged through ‘Disha App’, appealed to the women to download the App and make use of it.

The SP said Mahila Mitra committees were formed in all mandals and at each police station level in Krishna district. Mahila Mitra would act as a bridge between the public and the police and the investigation officers would visit the houses, enquire about the incident, take complaint and do justice to the victims, Mr. Ravindranath said.

About 50,000 people downloaded the ‘Disha App’ in just four days, and the police got 4.9 star rating out of 5. Many people were testing the functioning and the response of the App in a big way, said Director-General of Police D. Gautam Sawang.

Disha Special Officer Deepika said that police were receiving more than 2,000 calls every day since February 9, to test the functioning of ‘Disha App’. Instructions have been given to the police to respond to the complaints received through the App and in Disha Mahila Police stations, Ms. Deepika said.

Another accused held in heist case; over 6 kg gold recovered

Special teams of the Tiruchi city police probing the Lalithaa Jewellery heist on Sunday arrested another accused and seized a portion of the stolen valuables from him. The accused, C. Ganesan, 35, of Vadipatti in Madurai district, was arrested based on the information given by Murugan, the suspected mastermind who was brought by Bengaluru police […]

With online classes in vogue, schools shift focus to feedback and reviews

‘It has been a big transition for most teachers, with several challenges’ Source: thehindu.com Related

At a time when the prices of cash crops such as rubber, pepper, and coffee declined drastically, areca nut cultivation was the mainstay for many a farmer in the State. But various afflictions, climate change, and a sharp fall in price of the produce have fuelled the farmers’ worries. The spot price of white areca […]