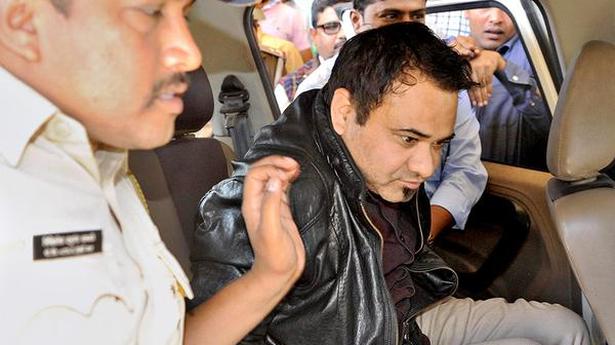 Dr. Kafeel Khan, who was arrested from the Mumbai international airport on Wednesday evening by the Special Task Force (STF) of the Uttar Pradesh Police, was produced before a metropolitan magistrate court in Bandra on Thursday afternoon amid heavy security.

As he was being led inside the court Dr. Khan told the media, “I was given a clean chit in the Gorakhpur [hospital deaths] case, now they are trying to frame me again. I would request the Maharashtra government to let me stay here as I do not trust U.P. police.”

Dr Khan was arrested under Section 153 (A) (promoting enmity between different groups on grounds of religion, race, place of birth, residence, language, etc., and doing acts prejudicial to maintenance of harmony) of the Indian Penal Code for allegedly delivering an inflammatory speech during a protest against the Citizenship Amendment Act (CAA) at the Aligarh Muslim University in December last year.

Dr. Khan told the magistrate that he was not being given a lawyer and appealed to those in the courtroom, but no lawyer came forward.

However, after sometime, lawyers Md Shaukat Khan and Alka Sharma agreed to represent him. Dr. Khan then told the court, “U.P. police will kill me. The U.P. government is trying to falsely frame me. The court can watch the entire video (of the speech). I have not said anything provocative. But still, if the case against me has to be pursued, please keep me in Mumbai.”

Dr. Khan’s lawyer said that sedition charges were not applicable as he had only given his opinion on how CAA will impact Muslims.

“We fear that U.P. Police will kill him in an encounter. He got a clean chit in the Gorakhpur childrens death case. But because he is putting pressure on U.P. government to nab the actual culprits, he is being framed,” said the lawyer.

After the hearing, Mr. Shaukat Khan told the media, “There is an apprehension of an encounter but we were told he will be given complete protection by the Aligarh police. The court has granted a transit remand and he will be safely produced within three days before the Lucknow Chief Judicial Magistrate.”

Advocate Sharma also said, “According to Dr. Khan, he has been implicated by the UP Police as he was selected as the best paediatrician and was going to be given an award so all of this has been done to tarnish his image.”

120 kg of the product, worth around ₹1 lakh, seized from shop after FSSAI raid Source: thehindu.com Related

Nitish Kumar is scared of my tweets

With 40 Lok Sabha seats, Bihar is a highly significant state. Plus, for the first time since 1977, Rashtriya Janata Dal chief Lalu Prasad Yadav, in judicial custody in Ranchi after his convictions in fodder scam cases, is not campaigning. In his absence, son Tejashwi Yadav, 29, is heading the opposition alliance against the NDA. […]

Chief Minister Uddhav Thackeray said the government is committed to giving justice to the Dhangar community, after the Opposition raised the issues of the community’s pending demand for reservation, in the Legislative Council on Monday. A special meeting on the matter will be held on Friday. A question by Ramhari Rupanvar (Congress) on the status […]