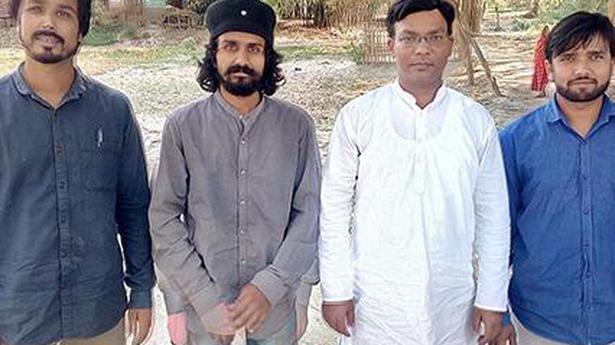 Driven by a desire to change the “political discourse of the country”, over 50 alumni of IIT have got together and formed a new party, the Bahujan Azad Party, to contest the Lok Sabha poll. Formed in April last year, the party has been allotted “slate” as its election symbol.

“Our party symbol signifies our motto: nurture the root first,” say a group of IITians in one voice as their white SUV moves precariously on a narrow levee full of potholes in Bihar’s Sheohar constituency. “It (levee) has been in construction for 20 years… you can see its condition, and they [parties in power in Bihar and at the Centre] keep talking about development,” says Anand Kumar Kushwaha.

A bespectacled young man clad in white kurta and blue jeans, Mr. Kushwaha is an alumnus of IIT-Delhi. He passed out in 2006 and founded a start-up in Bangkok. But somewhere in his heart, he says, there was an ache to do something for the people of his State.

He later came in contact with NGO ‘Mauka Foundation’ run by fellow IITian Akhilesh Kumar. Over 50 IITians were associated with the foundation that gives online coaching to IIT aspirants living in remote villages.

However, they all had dreams in their eyes and wanted to empower the downtrodden. Their IIT fellows in Delhi had seen and participated in the “Anna movement”. But they got disillusioned with fellow IITian Arvind Kejriwal’s (now Chief Minister of Delhi) “hurry to get power” and decided to take the plunge themselves.

BAP has decided to contest five seats in Bihar (Sheohar, West Champaran, Karakat, Patna Sahib and Patliputra), 22 in Maharashtra, one in U.P. (Allahabad), one in Punjab (Bathinda) and two in Delhi.

“We’ve our own way of interacting with the locals… we move on bicycles fitted with loudspeakers and reach out to people through meetings. The response is very encouraging,” says Mr. Akhilesh, who is also the party’s Bihar unit president. “While campaigning we seek a contribution of ₹1 from the locals to meet our expenses.”

Mr. Kushwaha is pitted against two-time sitting BJP MP Rama Devi and Syed Faisal Ali, a journalist, fielded by the RJD in Sheohar that goes to the polls on May 12.

The Ambur Town Police registered a case against DMK president M.K. Stalin and D.M. Kathir Anand, party candidate for Vellore Lok Sabha seat, on the charge of organising an election meeting in a marriage hall at Ambur on Thursday. A meeting of DMK leaders with Muslim leaders, which was attended by DMK treasurer Duraimurugan, Arakkonam […]