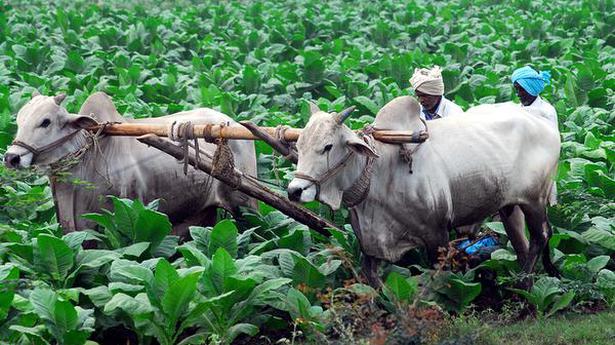 Ahead of auctions that are scheduled to take place this month-end, farmers in the traditional tobacco growing areas of Prakasam district are pleading traders to bail them out by offering a better average price for their produce, which they say has been grown against much odds.

A prolonged dry spell coupled with an infestation of the parasitic weed Orabanche Cernua had taken a toll on productivity, as well as on the grade out-turn this year, both in the Southern Black Soil (SBS) and Southern Light Soil (SLS) regions, said farmers after holding a meeting to take stock of the situation ahead of the marketing season.

“We will be able to break even only if we are offered an average price of ₹150 per kg this year and ₹200 per kg for bright grade tobacco,” said Ongole II Farmer Association Secretary V.V. Prasad.

Drought for the fifth consecutive year had forced them to incur additional expenses for arranging water through tankers to irrigate the crops, he adds.

Last year, the farmers had got an average price of ₹132 per kg. Cigarette manufacturers and exporters should offer at least ₹15 to ₹30 more per kg for various grades of tobacco for them to scrape through without incurring losses, said N. Chimpiraiah, a farmer leader from Vellampalli.

This year, productivity has been hit by 15-20% with more “thin-bodied” produce. Adding to the woes of farmers, more than 30% of the fields are infested by Orabanche Cernua, SBS Regional Manager G.Umamaheswara Rao explained.

Tobacco production in SLS and SBS put together is expected to be in the range of 80 to 85 million kg this year. Adverse weather conditions led to more of medium and low grade varieties and less of bright grade varieties this year.

Crop production is expected to be between 80 to 85 million kg in the traditional tobacco growing areas of SBS and SLS.

Days before the Supreme Court is to deliver its verdict on the Ayodhya issue, Prime Minister Narendra Modi on Sunday recalled how political parties and the civil society played a mature role in uniting people when efforts were made to create fissures ahead of the 2010 Allahabad High Court ruling on the disputed land in […]

The passage of the proposed new Revenue Act bringing the administration of all the revenue related activities under one roof is likely to take some more time. Chief Minister K. Chandrasekhar Rao announced his intentions to bring in reforms in the revenue administration couple of months ago stating that there was immediate need to completely […]

Left in the Lurch | Maharashtra

In 2016, when Ajit Pawar proposed that Uddhav Thackeray join hands with the Nationalist Congress Party (NCP) and the Congress to form an alliance and topple the Devendra Fadnavis-led BJP government in Maharashtra, the Shiv Sena chief developed cold feet. Three years later, it is Thackeray who is reviving the proposal to fulfil his dream […]