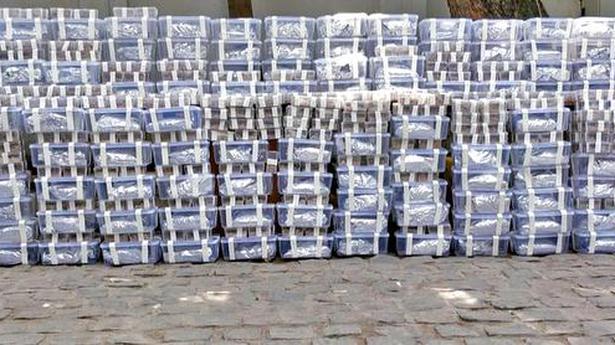 A unique modus operandi of smuggling heroin into the country has come to light following a Delhi police crackdown on an international drug syndicate operating in the Capital.

Deputy Commissioner of Police (Special Cell) Manishi Chandra said five persons, including two Afghan nationals, have been arrested and 150 kg of Afghan heroin worth ₹600 crore in the international market recovered from their possession.

The five men were allegedly extracting the narcotic from jute sacks soaked in heroin-laden solution, dried and packed with spices to be transported to India from Afghanistan, the police said.

The accused have been identified as Shinwari Rehmat Gul (30) and Akhtar Mohammad Shinwari (31), both residents of Afghanistan’s Jalalabad, Vakeel Ahmed (36) and Raees Khan (43) from Delhi and Dheeraj alias Deepak (21) from Faridabad.

A senior police officer said the syndicate was busted after a tip-off from a Special Cell officer living in disguise in Jamia Nagar a few months ago regarding a convoy of luxury cars moving late at night in the congested area at intervals of 10-15 days.

Stepped-up surveillance revealed that the convoy was transporting drugs and a heroin processing unit was possibly being set up.

Based on a specific input that the convoy would assemble near Ashram flyover around 12.30 a.m. on Thursday, a trap was laid and two cars intercepted with Deepak and Raees in them. Sixty kilos of heroin were recovered from a cavity between the back seat and the boot of the two cars, the police said.

The duo allegedly told the police about a three-storey building in Zakir Nagar where the processing unit was being set up. “A raid was conducted and the two Afghan nationals were arrested from the building,” Mr. Chandra said.

Pistols, cartridges, four luxury cars and 40 mobile phones were recovered in the raid.

“The mobile phones were disposed of after delivery of each consignment,” said an officer.

During interrogation, the accused confessed to taking advantage of the spice trade between India and Afghanistan, said the police.

The jute sacks, once empty, were picked up from the mandis by gang members and brought to the processing unit, where they were put in chemicals and the heroin extracted. The narcotic was then packed and transported across the country, especially to Punjab, and also to Sri Lanka, the police said.

The Indian mastermind of the syndicate has been identified and a search launched for him, the police added.

The Congress, at an official press conference on Sunday, refused to directly respond to former Haryana Chief Minister and party strongman Bhupinder Singh Hooda’s statement that he will soon decide his future course of action and his backing of the Centre’s decision on Article 370. “I am not commenting on his [Mr Hooda’s] comment but […]

Congress’s Chincholi MLA Umesh Jadhav, whose disqualification has been sought under the anti-defection law for skipping two legislature party meetings, on Monday submitted his resignation to Speaker K.R. Ramesh Kumar. Mr. Jadhav, a two-time MLA, had claimed he would not quit the Congress. His brother, Ramachandra Jadhav, however, told reporters, “My brother will join the […]