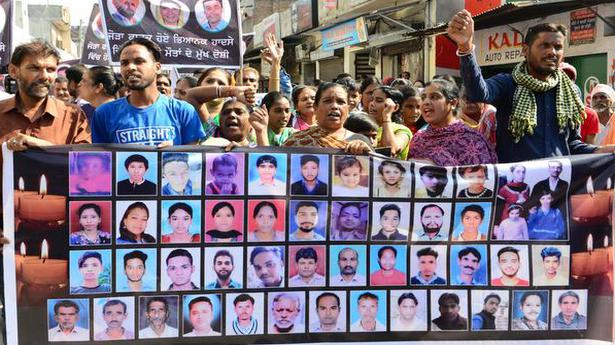 The Shiromani Akali Dal (SAD) here on Monday took out a candlelight march along with the kin of the victims who died in the train tragedy on Dussehra on October 19, 2018.

At least 61 people were killed and over 70 sustained injuries in the tragic incident near Joda Phatak in Amritsar.

The march was carried out from Ramtalai to the Dhobhi Ghat near Joda Phatak, where a train mowed down people witnessing a Ravana effigy going up in flames.

The function was organised by a close aide of former Punjab minister Navjot Singh Sidhu and his wife Dr. Navjot Kaur.

They demanded that the responsibility for the tragedy be fixed and the guilty be punished.

They also raised slogans against the Mr. Sidhu and his wife and asked why the former minister had “gone back” on his promise of providing jobs and pension to the victims of the train tragedy.

Talking to the media, Bikram Majithia said three inquiries had been held into the case but no action was taken in this regard.

He said the inquiry conducted by the Jalandhar Divisional Commissioner was only aimed at saving the Congressmen who were directly responsible for the tragic incident.

“The commissioner was not expected to take action against the then cabinet minister and his wife and this is exactly what happened. Even the close aide of the Sidhu couple — Mithu Madan — was shielded by making the inquiry a cover-up operation,” he said.

Demanding justice, the SAD leader said “We have come here only to express solidarity with families of the victims. Everyone knows that an unauthorised programme was held only at the intervention of former Local Bodies Minister Sidhu.”

“The Congress government could have acted in 24 hours if it wanted. Even now we only want that the guilty should be punished and appropriate compensation besides jobs be given to the kin of the victims,” he added.

Congress leader Priyanka Gandhi Vadra on Friday attacked the Narendra Modi government over the lockdown in Jammu and Kashmir for the last two months, saying it has affected innocent children the most. The Congress General Secretary also tagged a media report on Twitter which claimed that children in Kashmir were away from schools and were […]

A massive public meet was held in the city on Saturday demanding that the Citizenship Amendment Act (CAA), National Register of Citizens (NRC) and National Population Register (NPR) be repealed. The event was organised by Kurnool Joint Action Committee against CAA, NRC and NPR at the STBC Grounds. The event was attended by BAMCEF national […]

The changed political equations in the State reflected in the Aurangabad Deputy Mayor election on Tuesday, with the Shiv Sena’s Rajendra Janjal emerging victorious with the support of the Congress and the National Congress Party (NCP). Mr. Janjal’s win extended the Maha Vikas Aghadi coalition formula to the municipal level with the aim to keep […]