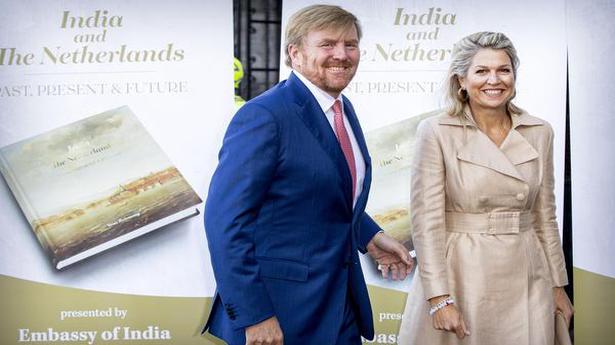 Netherlands King Willem-Alexander and Queen Maxima will arrive here on Sunday for a five-day visit during which they will hold meetings with the top Indian leadership to boost bilateral economic and political cooperation.

King Willem-Alexander’s trip would be his first state visit to India, following his ascension to the throne in 2013.

King Willem-Alexander and Queen Maxima will arrive here on Sunday night for the visit at the invitation of President Ram Nath Kovind, according to the Ministry of External Affairs.

The King and Queen will visit New Delhi, Mumbai, and Kerala during their visit.

On Monday, the Dutch royals will meet President Kovind and Prime Minister Narendra Modi, while External Affairs Minister S. Jaishankar will call on them.

The King and Queen will be accompanied on their visit by a senior ministerial delegation.

After the official programme in Delhi, King Willem-Alexander and Queen Maxima will also visit Mumbai from Wednesday and reach Kerala on Thursday. The royal couple will head home on Friday.

The Netherlands is the fifth largest investor in India with a cumulative investment of $23 billion for the period 2000 to December 2017, the MEA said.

The Dutch Royal couple will also attend the Inaugural Session of 25th Technology Summit in New Delhi on Tuesday. The Netherlands is the partner country for this Summit.

The Royal couple would be accompanied by about 140 business houses for this technology and innovation fair, representing various sectors, including agriculture, water, health-care and climate change.

The visit is expected to boost economic and political cooperation between India and the Netherlands, the MEA said.

He tried to avoid arrest by reaching Silchar in a bus from Rajasthan; passengers of bus sent to quarantine facilities Source: thehindu.com Related

A. Shankar Rao is new DGP of Sikkim

Senior IPS officer A. Shankar Rao has been appointed as Sikkim’s new Director General of Police, a government notification has said. Mr. Rao, a 1987-batch IPS officer of the Sikkim cadre, replaced S.D. Negi, who has been transferred to the Labour Department as Principal Secretary, it said. Mr. Rao is at present posted as the […]