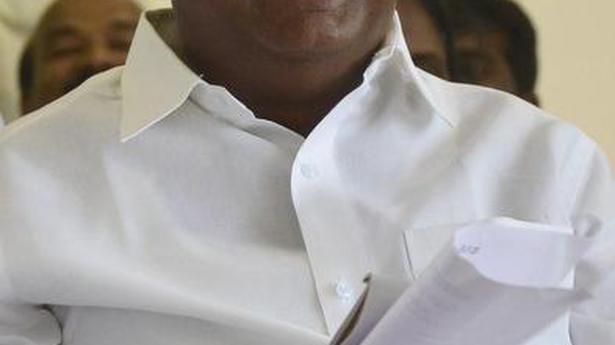 Janata Dal (Secular) State president A.H. Vishwanath has dismissed the Opposition criticism that his party, which is set to field the third member of a family as its candidate for the Lok Sabha elections, is taking dynastic politics to new heights.

Excerpts from an interview.

JD(S) supremo H.D. Deve Gowda has announced the candidature of his grandsons Prajwal Revanna and Nikhil Kumaraswamy from Hassan and Mandya respectively. He too is set to contest. Your reaction?

The very concept of dynastic politics has lost its meaning in the present socio-political situation. There is nothing wrong in the party fielding Mr. Nikhil Kumaraswamy. He is from a party which has a long political legacy. He has learnt the nuances of politics by closely watching his father, uncle, and grandfather. Similar is the case of Mr. Prajwal Revanna. He is assisting his father, H.D. Revanna, for long and he had worked for the victory of his grandfather.

Are they then endorsing dynastic politics?

No, I do not mean that the phenomenon should continue. It has to end but it takes time, considering larger politics of the country.

What will you focus on in the run-up to the polls?

The coalition will focus on regional issues and the Centre’s discriminatory treatment meted out to Karnataka on the issues pertaining land, water, and farmers, especially on agrarian crisis in the past five years. The Congress could have built dams to contain canards spread by [Prime Minister Narendra] Modi on the contribution of other political parties in the past seven decades. But it failed. It is not too late even now. All the stakeholders of the Mahagathbandhan have to sink in their differences and send the right signal of providing clean, and stable government. I only hope the next 30 days are enough for that exercise.

The investiture ceremony of the new batch of prefects was held in the Rashtriya Military School in Belagavi on Friday. Inspector-General of Police (Northern Range) Raghavendra Suhas spoke to students and urged them to prepare for a career in the Armed forces. “I see the sparkle of eagerness in your eyes to join the Armed […]

Congress in Goa on March 31 lodged a series of complaints against the State BJP-led government of violating model code of conduct. Goa Congress spokesperson Trajano D’Mello on March 31 said that the party has lodged a complaint with Goa Chief Electoral Officer(CEO) with a copy to Election Commission in New Delhi pointing out that […]

The 56- day Murajapam ritual at the Sree Padmanabha Swamy temple here culminated in a grand spectacle on January 15 with the temple and its precints bathed in the light of one lakh lamps signifying the Lakshadeepam festival. Colourful electric bulbs and earthen lamps lit up the temple gopuram and the banks of the Padmatheertham […]