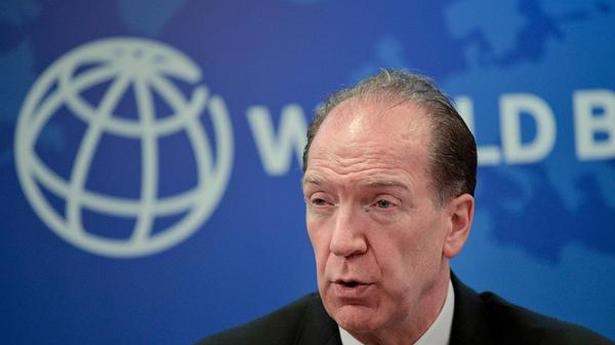 “India is being affected by the global environment and has slowed from the fast growth rates in over a year,” Mr. Malpass told journalists during a visit to Delhi where he met PM Modi and Finance Minister Nirmala Sitharaman and addressed officials at the NITI Aayog. “My prescription is that there be an openness to reform and to innovation and improvements in government structures that allow faster growth.”

Mr. Malpass declined to comment on recent World Bank figures that slashed India’s growth forecast for the current year to 6%, down sharply from the 7.5% forecast in April this year, saying only “economists have lots of forecasts”. He did not respond to a specific question about the impact of the 2016 demonetisation move, which the World Bank had praised in early assessments, but has in more recent studies, held the measure responsible for slowing growth.

Mr. Malpass congratulated the government on bringing India’s ranking in the World Bank’s annual “Ease of Doing Business”, from 140th amongst all countries in 2014 to 63rd in the latest ranking. He credited the government’s moves to liberalise procedures for registering businesses, facilitating more cross-border trade, bankruptcy resolution and in the construction process, with the boost in rankings.

Mr. Malpass will travel to Pakistan on this visit to the region, which has also jumped 28 spots to rank 108th during the latest World Bank surveys released on Thursday.

The World Bank President praised the government’s recent move to cut corporate tax rates, but cautioned that many more steps are required for India to attract investment into manufacturing.

“Other countries in Asia have done pretty well, and a country’s competitiveness is a combination of factors. It is partly the ease of doing business, but there are many other factors like macro-economic stability, skills of the workforce etc in order for companies to come here and invest,” Mr. Malpass said, adding that he spoke to Mr. Modi about the challenges in the financial sector in the country, as well as the “importance of data in the Indian economy and the role of the World Bank in helping collecting data”.

However, Mr. Malpass indicated that the Bank expects to continue with its current loan programme of about $5-6 billion a year, with a commitment of $24 billion for 97 ongoing projects. Mr. Malpass will also address civil service probationers along with Mr. Modi, who are attending a special event at Gujarat’s Kevadia, at the site of Sardar Patel’s statue.

Tribals take out rally against Maoists

Over 600 tribals from Majjigaruvu village in G. Madugula mandal in Visakhapatnam Agency assembled to take out a rally in protest against atrocities committed by the banned CPI(Maoist), on Wednesday. The tribals demanded that the Maoists stop killing innocent tribals after accusing them of being police informers. This year alone, five tribals were killed by […]