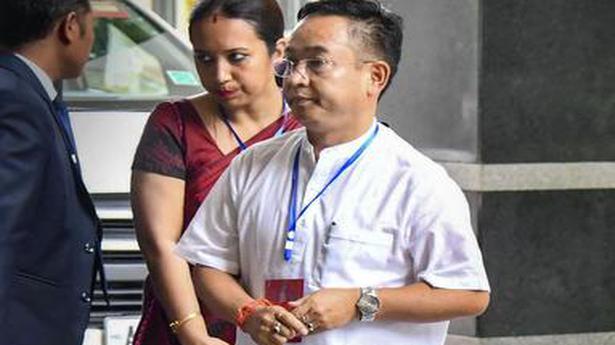 The Election Commission on Sunday reduced Sikkim Chief Minister Prem Singh Tamang’s disqualification period by almost five years under a provision of the electoral law, paving the way for him to contest the State Assembly election.

His disqualification period of six years, during which he was barred from contesting polls, began on August 10, 2018 — the day he completed a year’s jail term in a corruption case. It was to end on August 10, 2024.

But the EC on Sunday reduced it to one year and one month.

Mr. Tamang, whose Sikkim Krantikari Morcha party won the State Assembly election held in April, took over as Chief Minister on May 27. However, he could not contest the election due to his disqualification.

He has to contest Assembly Poll within six months of becoming the Chief Minister to hold the office.

Mr. Tamang was found guilty of misappropriation of government funds in a cow distribution scheme while he was the Minister of Animal Husbandry in the 1990s.

A case was registered in 2003 under the Prevention of Corruption Act that was subsequently repealed. Mr. Tamang has served the full sentence.

In July, Mr. Tamang had requested the poll panel to waive his disqualification period under Section 11 of the Representation of the People Act.

Section 11 of the RP Act states, “The Election Commission may, for reasons to be recorded, remove any disqualification under this Chapter 1 (except under section 8A) or reduce the period of any such disqualification.”

‘Faith in his leadership’

The EC order, signed by Chief Election Commissioner Sunil Arora and Commissioners Ashok Lavasa and Sushil Chandra pointed out that Mr. Tamang neither approached the commission to seek removal of his disqualification nor filed his nomination papers for the Sikkim Assembly poll this year.

“He has, in fact, approached this Commission only when the elected representatives of his party, commanding a clear majority in the Assembly of Sikkim, posed their faith in his leadership and when the Governor, in recognition of the same, invited him to form government,” the eight-page order said.

The EC also cited some previous cases in which it had allowed similar requests.

In the case of Shyam Narain Tewari, a person who wrongly contested the election, the EC gave due weightage to the mandate of the people and in respect of the same it removed the disqualification of a man who was originally sentenced to death, it said.

In the case of Mitrasen Yadav, also a murder convict, the Commission removed his disqualification in order to allow him to contest elections, it said.

“In the present case, the conduct of the applicant (Tamang), that he did not even attempt to seek removal of disqualification for contesting the General Elections (Sikkim Assembly polls), shows his acceptance of the statutory disqualification… ,” the order read.

Nationalist Congress Party MP Supriya Sule alleged harassment by a taxi driver when she arrived at the Dadar railway terminus here on Thursday. Ms. Sule, who lodged a complaint with the Railway Protection Force (RPF), said the driver, Kuljeet Singh Malhotra, entered her railway compartment and blocked her way while asking if she needed a […]

‘Nearly 1.5 lakh vehicles were being operated in Tamil Nadu and the lockdown has hit the sector with nearly 18 lakh people facing job loss’ Source: thehindu.com Related