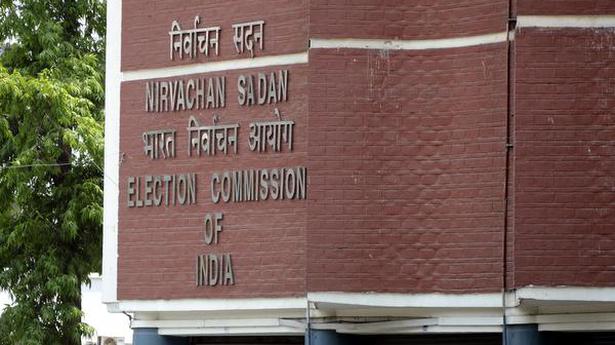 The Election Commission of India (ECI) is set to announce on Sunday the schedule for the high-voltage Lok Sabha elections, which is likely to be spread over seven to eight phases in April-May.

The poll panel will be holding a press conference at 5 p.m. at Vigyan Bhavan in New Delhi.

As soon as the elections, in which Prime Minister Narendra Modi will make his bid to return to power amid hectic parleys by several political parties to put a united fight against the ruling BJP, are announced, the model code of conduct will come into force.

Amongst other things, the code bars the government from announcing policy decisions.

Notification for the first phase could be issued by the end of March for voting some time in early April, sources suggested.

There is a strong possibility that the EC may go by the precedent and hold Assembly elections in Andhra Pradesh, Odisha, Sikkim and Arunachal Pradesh along with the Lok Sabha polls.

Since the Jammu and Kashmir Assembly has been dissolved, the EC is bound to hold fresh polls there as well within a six-month period, which will end in May.

While there is a view that the J&K Assembly elections can be held along with the Lok Sabha polls, a lot depends on the complex security situation in the State given the heightened tension along the India-Pakistan border.

The Centre and the State administration, being managed by the Centre-appointed Governor, are against holding the two elections together.

However, all political parties in the State favoured simultaneous polls during a meeting with the Election Commission earlier this week.

The J&K Assembly’s six-year term was to end on March 16, 2021, but it got dissolved after a ruling coalition between the Peoples Democratic Party (PDP) and the Bharatiya Janata Party (BJP) fell apart.

The other State Assemblies and Lok Sabha have five-year terms.

The required electronic voting machines and paper trail machines are in place to be deployed in nearly 10 lakh polling stations across 543 Lok Sabha constituencies.

There is a high probability of the elections being spread across seven to eight phases this time.

In 2014, the EC had announced the election schedule on March 5 and the nine-phase electoral exercise was spread across April and May.

While the first phase polling was on April 7, the last phase was on May 12.

Supporters of the Jannayak Janta Party (JJP) have been venting their anger on social media platforms over the party’s decision to extend support to the BJP to form government in Haryana. The supporters, mostly youth, have been posting angry messages and videos accusing JJP leader Dushyant Chautala of “betrayal” and “going back on his words”. […]

Baramati sealed, number of cases in Pune district is 245

Baramati city has been sealed after it recorded one death and at least six COVID-19 positive cases. Determined to follow the ‘Bhilwara model’ for containing the spread of the virus, Deputy Chief Minister and Pune Guardian Minister Ajit Pawar instructed that no vehicle would be allowed to enter the city without being thoroughly checked. The […]

Many girls drop out of college after being pressured into marriage

Amid the COVID-19 pandemic, many girl students in Karnataka are dropping out of degree programmes after being persuaded by their families to get marr Source: thehindu.com Related