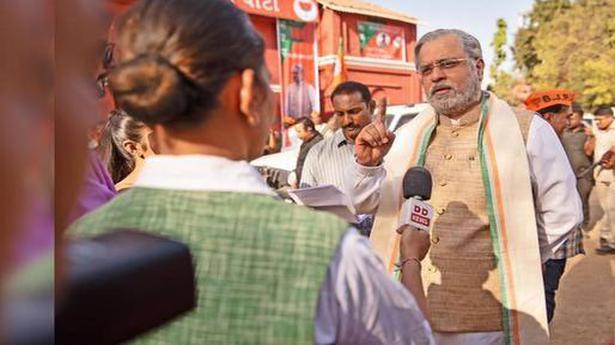 The Election Commission of India (ECI) on Saturday directed the producers of a web series on Prime Minister Narendra Modi to immediately stop its online screening and remove all connected contents till further orders.

Taking cognisance of complaints alleging that Modi – Journey of a Common Man was violating the Model Code of Conduct and it amounted to influencing the voters, the ECI wrote to the producers, Eros Now, citing its April-10 order banning any biopic having the potential to disturb the level playing field during the elections.

The web series showcases different stages of Mr. Modi’s life, from his childhood to becoming a national leader.

“Whereas, in view of the admitted facts and material available on record, this web-series being an original web series on Narendra Modi, Prime Minister and a political leader, and a prospective candidate in the current general elections to the Lok Sabha, cannot be exhibited in view of the Commission’s aforesaid order,” said the letter, adding that a compliance report be sent immediately.

A woman was arrested in Chandigarh on Saturday after a video in which she is seen thrashing her 80-year-old mother-in-law had gone viral on social media. The act was captured on a mobile phone by a girl who is the neighbour of the victim residing in Niwaz Nagar village in Mahendragarh district’s Narnaul. Haryana Chief […]