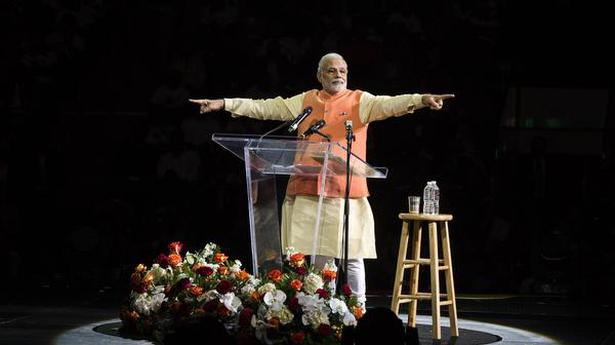 As the crucial weeks-long general elections began in India, issues like sustained economic growth, national security and protection of democratic values are among key poll priorities for the Indian diaspora across the US as it galvanizes support for various political parties.

An Indian-American community group recently organised an election campaign kickoff event in upstate New York, voicing its support for the Bharatiya Janata Party and Narendra Modi in the 2019 elections. With slogans of ‘Abki bar 400 paar’, Modi supporters among the diaspora said they are confident that he will return to power for a second term.

American India Public Affairs Committee president Jagdish Sewhani said the 2019 general elections are very crucial for the future of India. “National security is a top priority of the BJP,” he said, adding that another term for Mr. Modi will ensure sustained economic growth and development in the country.

Members of the Indian-American community organised and participated in several programmes across the US, including a ‘Chowkidar March’ in New Jersey, car rallies in Washington and Virginia, which travelled 12 miles.

Meanwhile, advocacy group ‘Coalition for the Defence of the Constitution and Democracy’ held a ‘Defence of Democracy’ rally in the city.

The rally was co-sponsored by other groups such as Alliance for a Democratic and Secular South Asia, Coalition for a Democratic India and Dalit Solidarity Forum (DSF) and Indian American Muslim Council.

“The BJP government has also been responsible for systematic erosion and weakening of democratic values and institutions,” the Coalition said in a statement.

It called for ensuring free and fair elections.

It also said that lynchings of Dalits and Muslims must be stopped and perpetrators be prosecuted.

Those raising revolutionary slogans are being told to go to Pakistan, says Digvijaya Singh

Former Madhya Pradesh Chief Minister and Congress MP Digvijaya Singh has said those raising “revolutionary slogans” coined during the freedom struggle led by Mahatma Gandhi were now being told in independent India to go to Pakistan. The police should act against those abusing and giving death threats to people standing up to Prime Minister Narendra […]

Expressing anger over including portraits of Dr. B.R. Ambedkar in the campaign material of Ganeshotsav by Hindutva groups in Challakere of Chitradurga district, several Dalit organisations have demanded removal of the posters and banners in the town. Terming it “an attempt by Hindutva groups to appropriate Ambedkar”, the organisations submitted a memorandum to the tahsildar […]