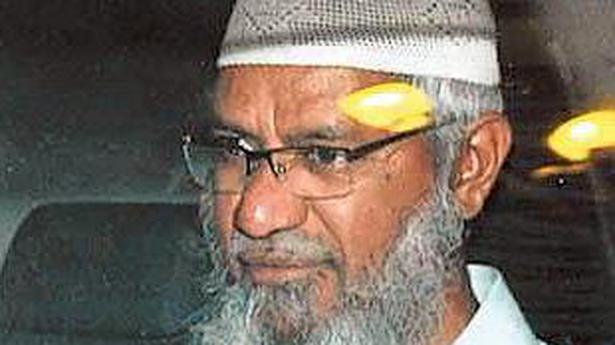 The Enforcement Directorate (ED) moved an application before the special Prevention of Money Laundering Act court on Monday to declare the controversial televangelist Zakir Naik a Fugitive Economic Offender under the new law.

ED submitted the application along with supporting documents in a sealed envelope. It is scheduled to be heard on September 30.

The move comes after the agency obtained a fresh non-bailable warrant against Mr. Naik last week. If he does not appear before a court in time, and is declared a fugitive economic offender, the agency will be able to confiscate his assets in India and abroad, said ED sources.

The agency alleged that to disguise the origin of funds and the real ownership of properties, the initial payment from the account of Mr. Naik was diverted to the accounts of his wife, son and niece and rerouted again for making bookings in the names of family members rather than in his (Mr. Naik’s) name.

The ED had booked Mr. Naik in 2016 after the National Investigation Agency (NIA) registered a case for promoting enmity between different groups, delivering hate speeches and money laundering. The NIA had alleged that the Islamic Research Foundation run by Mr. Naik had organised several peace conferences in Mumbai between 2007 and 2011, where he tried to radicalise and convert people.

A group of 186 Malaysian nationals, who were stranded in Tiruchi for the past few days following the cancellation of international flights, were flown back to their country in a rescue flight early on Sunday. Airport sources said that an Air Asia flight was operated from Kuala Lumpur to Tiruchi in the late hours of […]

‘Govt. should provide relief to them’ Source: thehindu.com Related

MP Derek O’Brien claims in his letter that there is enough evidence in public domain to substantiate his charge. Source: thehindu.com Related