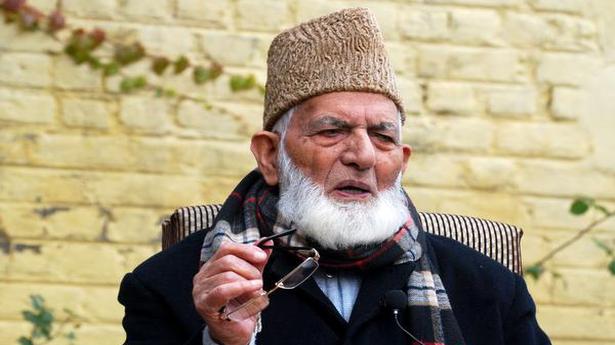 The Enforcement Directorate has levied a penalty of ₹14.40 lakh and ordered confiscation of nearly ₹6.8 lakh in connection with a FEMA case against Jammu and Kashmir-based separatist Syed Ali Shah Geelani, officials said on Friday.

The case pertains to Mr. Geelani in illegal possession of foreign exchange, which was being investigated by the ED under the Foreign Exchange Management Act (FEMA).

After completion of the probe and adjudication proceeding, the Enforcement Directorate issued an order on March 20 under the FEMA, levying the ₹14.40 lakh penalty and confiscating forex of $10,000 (nearly ₹6.8 lakh) that was allegedly recovered from Mr. Geelani, they said.

The case was taken up by the ED on the basis of an Income Tax Department complaint against Mr. Geelani.

A similar proceeding against another separatist Yasin Malik, former Chairman of JKLF, is underway.

The government is in the process of forming a task force to draw a blueprint for handing over operations of 150 trains and 50 railway stations to private operators in a “time-bound manner”. A letter from Niti Aayog CEO Amitabh Kant to Chairman, Railway Board V.K. Yadav said an empowered group will be constituted to […]

Many places in south Tamil Nadu are likely to receive moderate rainfall till Friday under the influence of the weather system that lies over the Comorin area. Some places over the north Tamil Nadu too have chances of moderate rainfall till Friday, according to the Meteorological Department. On Tuesday, several weather stations across the State […]