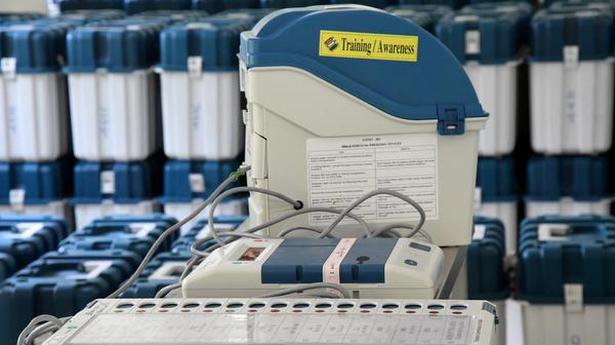 Chief Election Commissioner Sunil Arora on Sunday said the committee of experts from the Indian Statistical Institute, constituted to determine a feasible threshold for counting of Voter Verifiable Paper Audit Trail (VVPAT) slips, would submit its report before the conclusion of the Lok Sabha election process.

In February, leaders of Opposition parties had approached the Election Commission (EC) expressing concerns over the possibility of Electronic Voting Machines (EVMs) being tampered with. They demanded that 50% of the EVM results be matched and cross-checked with VVPAT slips before declaring the Lok Sabha election results.

Responding to a query, Mr. Arora said the political parties had given the EC a memorandum to that effect. Stating that the matter was also pending in the Supreme Court, he said the EC had started counting VVPAT slips at one polling station per Assembly constituency.

However, as that political parties and other stakeholders raised the issue of counting more VVPAT slips, the Commission appointed a high-powered committee from the Indian Statistical Institute to look into the issue.

“The Commission expects the report to come any time, certainly before the poll process is over. It will then discuss the report and take a view,” he said.

The coalition wins in Nagpur, Pune and Aurangabad graduate constituencies but loses to the BJP in Dhule-Nandurbar In a major jolt to the Bharatiya Janata Party (BJP), the ruling tripartite ‘Maha Vikas Aghadi’ (MVA) swept the three graduate constituency seats in the Maharashtra Legislative Council (MLC) polls, breaching the BJP’s bastion in Nagpur and clinching […]

The Ganapavaram police on Tuesday seized gold biscuits weighing 30 kg at the Narayanapuram toll plaza and handed over the same to the Income Tax Department. According to Superintendent of Police M. Ravi Prakash, a team of police headed by Sub-Inspector Ramkumar spotted 300 gold biscuits each weighing 100 gm in a car that was […]

Sushant case probe has not concluded yet: CBI

Reports of completion of investigation are speculative and erroneous, it says Source: thehindu.com Related