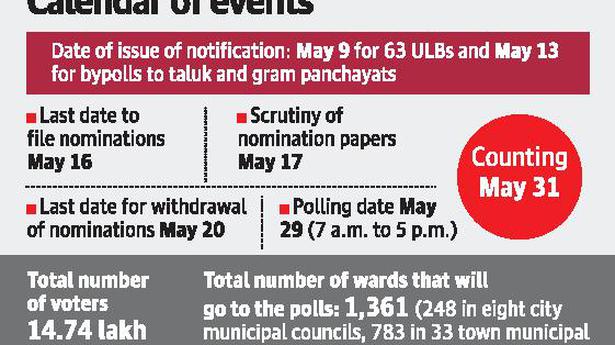 State Election Commissioner (SEC) P.N. Srinivasachari announced the calendar of events for the ULB polls on Thursday. He said the notification for the polls would be issued on May 9.

On May 29, bypolls to two wards of the Bruhat Bengaluru Mahanagara Palike (BBMP) — Kaveripura and Sagayapura, and one ward each in Tumakuru Mahanagara Palike, Hebbagodi CMC in Bengluru, and Sadalaga and Mugalkhod TMCs in Belagavi will also be held. These seats fell vacant following the death of elected representatives.

That apart, the SEC also announced the calendar of events for the byelections to 10 seats in eight taluk panchayats and 202 seats in gram panchayats that have fallen vacant owing to various reasons. These bypolls will also be held on May 29 and the jurisdictional deputy commissioners will issue the notification on May 13. Counting of votes for all these elections will be held on May 31, Mr. Srinivasachari said.

The model code of conduct will come into force with immediate effect in the areas that will go to the polls and will be in force till May 31, he said.

Elections to 109 ULBs, whose term had ended in September 2018, were held in the first phase in August last year. Of the remaining 103 ULBs, whose term ends between March and July 2019, only 63 ULBs will go to the polls on May 29. “This is because cases pertaining to the remaining 39 ULBs are pending in the High Court,” he said.

While elections to all the ULBs in Udupi, Bagalkot, Raichur, and Koppal districts were conducted in August 2018, elections to the ULBs in Ramanagaram, Kodagu, Belagavi, and Kalaburagi cannot be held in the second phase, although their term has ended, because cases pertaining to them are before the High Court.

ED findings made part of CBI FIR in Amnesty case

The Enforcement Directorate’s findings in its probe against the Amnesty International India Private Limited (AIIPL) and related entities have been made part of the case registered by the CBI alleging violation of the Foreign Contribution Regulation Act. The Union Home Ministry had first raised the issue with the RBI on May 23, 2018. Subsequently, through […]

A militant was killed in an encounter with security forces in Jammu and Kashmir’s Shopian district on Friday, the Army said. Also read: India pounds LoC terror launchpads, Pakistan Army sites The encounter began in the morning after security forces launched a cordon and search operation in the Dairoo area of Shopian in south Kashmir […]