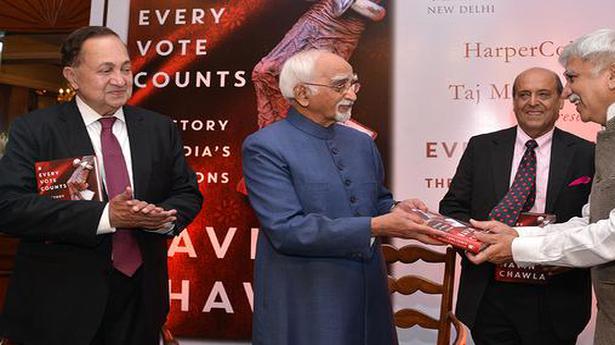 Former Vice-President Hamid Ansari on Saturday expressed concern over the “inefficient” functioning of institutions like Parliament when it came to holding the rulers of the day accountable.

Speaking at the launch of former Chief Election Commissioner Navin Chawla’s book Every Vote Counts-The Story of India’s Elections, Mr. Ansari said: “Democracy is all about certain values and institutions. Values are easily put across, that in periodical intervals the electorate elects the rulers. Over the decades we have polished that system and made it truly commendable.”

However, he said, the institutions — the elected bodies from which the actual rulers of the day emerged — were functioning “very inefficiently”.

The book launch followed a conversation between Mr. Chawla and N. Ram, Chairman of The Hindu Group of Publications.

Mr. Ram said the Election Commission had over the years adopted technology and innovation, particularly the Electronic Voting Machines (EVM).

On EVMs, Mr. Chawla said though controversy was sought to be created by losing candidates or parties periodically, he was convinced they could not be tampered with. He said all High Courts and the Supreme Court had upheld its use.

More than 2,000 Tamil Nadu fishermen were allegedly attacked and chased away by the Sri Lankan Navy while they were fishing in Indian waters, a fishermen association leader said here. The fishermen from this island town had ventured into the sea on Monday and were fishing when the Lankan naval personnel trespassed into Indian waters […]

Maharashtra Chief Minister Devendra Fadnavis unveiled the second phase of the mahajanadesh yatra with a roadshow in Dhule on Thursday. The CM’s convoy was accompanied by Water Resources Minister Girish Mahajan and other senior Bharatiya Janata Party (BJP) leaders. The yatra started at Dhule at 4.20 p.m., made its way to Dondaicha at 7 p.m. […]

BJP MLA Kuldeep Singh Sengar was among the 10 people named in an FIR registered on Monday in connection with a road accident in which the Unnao rape survivor and her lawyer were critically injured and her two aunts killed, police said. Speaker of the Karnataka Assembly Ramesh Kumar on Monday resigned with immediate effect. Following the […]