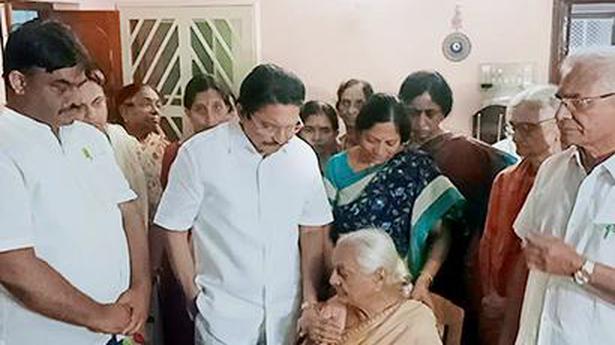 Eminent academician and founder of Vani Nikethan educational institutions Cheeti Ayodhya Rama Rao passed away at the age of 84 at his residence in Mukarampura locality in Karimnagar town on Friday morning.

Born in Vedira village in Ramadugu mandal on July 21, 1937, Mr. Rama Rao is brother of senior Congress leader and former MP and former minister M Satyanarayana Rao. Mr Rama Rao was the first person to start a private school in Karimnagar in the year 1968 with 45 students.

He completed his PG from Osmania University in 1961 and got a job as accountant in the State Legislative Assembly. However, he quit his job and started the first private educational institution in Karimnagar in the year 1968 with nominal fees for the benefit of all sections of society. Now the Vani Nikethan educational institutions offer education from KG to PG in Karimnagar town with an enrolment of 4,000 students. He is survived by his wife and three daughters. His last rites would be performed on Sunday at Irukulla crematorium after the arrival of his son-in-law and granddaughter from USA.

Last year, the Vani Nikethan educational institutions celebrated its golden jubilee on a grand scale wherein former governor ESL Narasimhan appreciated the services of Mr. Rama Rao. The alumni had also felicitated him on the occasion.

Airline not obliged to escort passengers to boarding gate: SC

An airline is under no obligation to escort its passengers right up to the boarding gate after boarding pass is issued at the airport check-in counter, the Supreme Court held in a judgment on Tuesday. The passenger, after securing the boarding pass, is expected to proceed towards the security channel area and head to the […]

Amid nationwide outrage over the Unnao rape incident, the Uttar Pradesh police on Thursday swung into damage control mode by suspending three constables entrusted with the task of guarding the rape survivor, even as Opposition sought the resignation of Chief Minister Yogi Adityanath. Stepping up its attack on the ruling BJP, the Samajwadi Party said […]

The State government does not intend to go back on its decision to allow the production of low-alcohol beverages from fruits, Excise Minister T.P. Ramakrishnan informed the Assembly on Wednesday. Their production would, in fact, help to bring down consumption of hard liquor, he said in a written reply to the House. The decision to […]