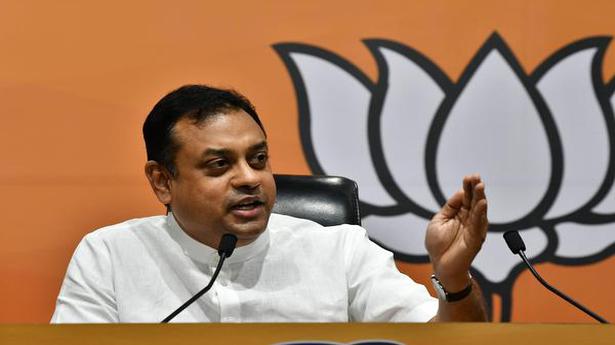 People of Hyderabad now have the opportunity to put an end to the ‘FFPL’ – Family & Friends Private Limited firm of KCR and Owaisi by voting for the BJP in the GHMC polls, said national spokesperson Sambit Patra on Saturday.

At a press conference in the party office, Mr. Patra charged that “a single family” and “their friend” have been holding sway in the city “throwing the development aside. Everyone is aware of it and this is the discussion in every part of the twin cities” as both parties have been treating the capital as their personal fiefdom, he said.

“If you vote for Congress, the vote will go for TRS and if you vote for TRS, it is a vote for Majlis. The current political battle for a development oriented BJP Mayor or a communal & divisive Majlis Mayor,” he maintained.

The BJP leader ridiculed the TRS and Majlis claim of being political adversaries. “How can they deny an alliance when they raised the slogan of ‘Car, saaru, padaharu (16)’ during the Parliament polls?. The car is soon going to get punctured, Saaru will confine himself to the farmhouse and they will have ‘zero’ seats,” he prophesied.

During the last six years, the progress is visible in KCR family and Pragati Bhavan while the poor and downtrodden have to fend for themselves. “You have to wait for 50 years if the promised two-bedroom houses have to be built for all the eligible applicants,” accused Mr. Patra. He, further, alleged that encroachments mostly by the TRS and Majlis party activists has led to recent floods in the city.

Political parties, right wing outfits and devotees in Kerala are keeping their fingers crossed as the Supreme Court is set to pronounce on Thursday its verdict on pleas seeking review of its decision to allow entry of women of all age groups in the Sabarimala Temple. The southern state had witnessed high drama and protests […]

Watch | Save the Indian Mango: How farmers are hoping to tide over COVID-19 crisis

India is a leading producer and exporter of mangoes. The country grows about 1,500 varieties and exports nearly 50,000 tonnes of mangoes annually. Also read | How Dapoli’s Noshirwan Mistry is planning to save this year’s mango harvest Rare varieties such as Azam-us-Samar are sent from the Nizam’s family in Hyderabad to Queen Elizabeth. Mallika, […]