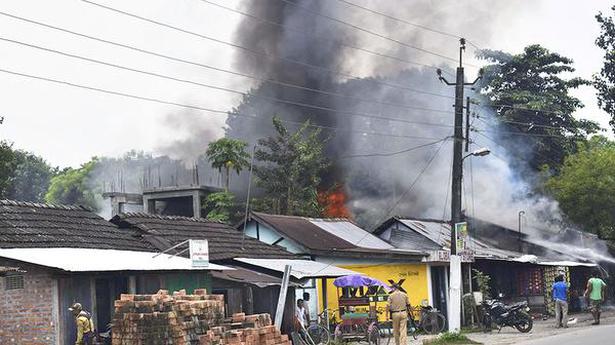 But lack of development and jobs have seldom mattered in Kokrajhar, straddling 10 Assembly segments within BTC and beyond, that has suffered decades of extremism, a statehood movement, and communal violence.

The electoral battle has thus often boiled down to a contest between the Bodos and non-Bodos, more intensely since the 2014 Lok Sabha election when a conglomerate of 19 non-Bodo organisations propelled Independent candidate Naba Kumar Sarania to Parliament.

Mr. Sarania, a former leader of the outlawed United Liberation Front of Asom, won the Kokrajhar seat in 2014 by a margin of 3,55,779 votes over Mr. Brahma.

He is the first non-Bodo to have won the seat since 1957 and hopes to retain it with a similar margin “because the oppressed non-Bodos” are behind him.

Though Bodos are the single largest community in Kokrajhar, the non-Bodos, including migrant Bengali-speaking Muslims —the second largest group — account for more than 70% of the population.

“I will deliver a knockout punch to my rivals this time. My supporters, who are neglected in the BTC, know Assam would have been fragmented had I not been in the picture,” said Mr. Sarania, referring to the Bodoland statehood movement which has its genesis in the “divide Assam 50-50” call in the 1960s. But more than Mr. Brahma, Mr. Sarania has trained his guns on the State’s Social Welfare Minister and Bodoland People’s Front (BPF) candidate Pramila Rani Brahma.

The BPF, headed by Hagrama Mohilary, has been ruling the BTC since its creation in 2003 and is part of the Sarbananda Sonowal-led BJP government in Assam.

The 69-year-old Ms. Brahma and Mr. Mohilary are former extremists like Mr. Sarania. Their outfit, Bodo Liberation Tigers, was disbanded soon after the BTC was born. “Our focus is on development and ensuring peaceful co-existence among all the communities that enrich BTC and other areas under Kokrajhar,” said Ms. Brahma, confident of succeeding where her predecessor — fellow Minister in the Assam government Chandan Brahma, also a former extremist — failed to by finishing third in 2014.

But the non-Bodos are wary of her controversial statement after the 2014 election that led to the killing of 32 Muslims, mostly women and children in BTC areas. She had allegedly accused the Muslims of not voting for the candidate of her party that year. The BTC areas were witness to ethnic violence earlier too. More than 500 people were killed between 1993 and 2012 in communal attacks that claimed the lives of Muslims and Adivasis, besides Bodos.

The 2012 violence displaced more than 1,00,000 Muslims most of whom did not return. “Whether it is a Bodo or a non-Bodo who wins, all we want is an end to living in fear,” said Hareswar Nath, a farmer in the constituency’s Sorbhog area.

Altogether 12 candidates are vying for the Kokrajhar seat that goes to polls on April 23.

Friends, colleagues and relatives of child rights activist Seena Rajagopal got together at the Kerala Sahitya Academy hall on Sunday to commemorate her first death anniversary. Addressing the gathering, Agriculture Minister V.S. Sunil Kumar recalled that Seena Rajagopal was an active presence in child welfare activities. She dedicated her entire life to creating awareness among […]

At an uninhabited island near the mouth of Chilika lagoon, 10 members of the Amateur Radio Society of Odisha (ARSO), with no access to electricity and communication lines, tested their skills and technology to use radio for enhancing preparedness for natural calamities. The three-day-long second annual field camp at the remote island ended on Sunday. […]

Senior advocate and former Additional Solicitor General Amarendra Sharan passed away on Monday after suffering heart attack. One of his close associates said that Mr. Sharan, 69, died in Rishikesh, Uttarakhand. He is survived by wife Madhu Sharan, also an advocate, and two daughters and a son. Mr. Sharan was the Additional Solicitor General in […]