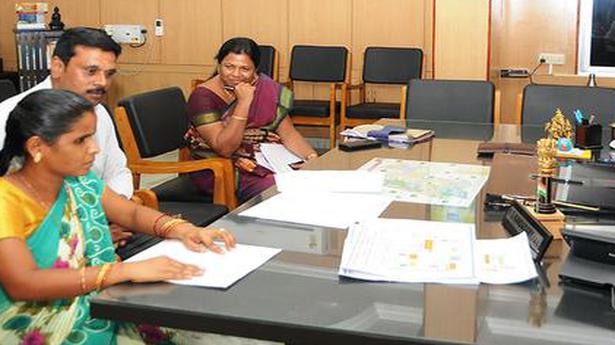 Thanks to the efforts of Election Commission of India, those with visual impairment can now cast their vote without any assistance in the general and byelections scheduled for April 18.

A demonstration on EVMs with Braille touch and dummy ballot papers was held at the Tiruvannamalai Collectorate where Collector K.S. Kandasamy reviewed the operations in front of a visually-impaired voter Vanitha.

All arrangements were in place, Mr. Kandasamy said adding that in the eight Assembly segments in the district, 18,324 voters with physical disabilities were identified. Among them 1,965 were found out to be visually impaired. All polling stations will be provided with dummy ballot papers and EVMs with Braille touch, he said.

The District Election officials said that dummy ballot papers containing the serial number of the contesting candidate, name of the candidate and the party affiliation were in Braille in various languages including English, Tamil, Hindi, Telugu and Urdu.

One copy each of the three-language sheet will be supplied to each polling station. When a visually impaired voter enters the polling station, the presiding officer will give her a dummy ballot paper in the language she prefers.

After studying the contents, the voter can proceed to the voting compartment and press the serial number of the candidate on the balloting unit.

Only 16% of children in Class 1 in 26 surveyed rural districts can read text at the prescribed level, while almost 40% cannot even recognise letters, according to the Annual Status of Education Report (ASER) 2019, released by NGO Pratham on Tuesday. Only 41% of these children could recognise two digit numbers. However, ASER found […]

Prime Minister Narendra Modi on Saturday asked the people of Arunachal Pradesh to vote for a ‘chowkidar’ (watchman) who would provide security to the country even as he attacked Opposition parties, claiming they were “disheartened” by India’s growth and success. Kicking off his campaign in Aalo for simultaneous Lok Sabha and Assembly polls in Arunachal […]

Communal amity to the fore as 10 Muslim youths reach out to the poor family in Tumakuru Source: thehindu.com Related