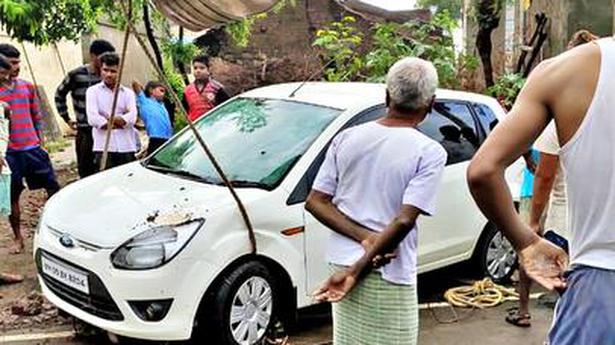 Heavy rain has caused damage in Examba village in Belagavi district. As many as 20 vehicles, including cars and motorbikes, were washed away in flash floods in the village on Sunday night. Vehicles floated in rainwater and were found around 100 metres away from where they were parked on the roadside. Some cars that rammed walls and other vehicles suffered damage. Rainwater also entered the primary health centre and caused inconvenience to patients for some time there. Nurses and attendants had to throw out the rainwater.

No one was injured. There were no casualties. Police and Revenue officers used cranes to shift the damaged vehicles and cut down branches that had fallen on the streets.

“Rain in Examba and surrounding villages was slightly more than average. But flash floods were caused in Examba as the village drains were blocked. They are being cleaned now,” a Revenue officer said.

MLA Shashikala Jolle visited the village and met officials. On Sunday night, Chief Minister H.D. Kumaraswamy called Deputy Commissioner S.B. Bommanahalli to inquire about the situation in Examba. Mr. Bommanahalli told the Chief Minister that rain damage was reported in one or two villages and that there were no injuries or casualties.

First phase of voting begins for 4 LS constituencies, and 28 Assembly seats in Odisha

Polling in first phase has begun in four Lok Sabha constituencies and 28 Assembly seats in Odisha. Simultaneous polling is being held for Koraput, Nabarangpur, Kalahandi, Berhampur Lok Sabha constituencies and 28 Assembly seats under them. Total of 60,03,707 voters are to exercise their franchise in 7233 polling booths. Out of them 2375 booths have […]

A spectacular parade and colourful cultural events marked the 71st Republic Day celebration held on Sunday. Governor Ganeshi Lal hoisted the tri-colour and took the salute at the State level celebration held at Mahatma Gandhi Marg. A total of 48 contingents took part in the parade and seven tableaus, showcasing the achievements of different organisations, […]

A patient who was undergoing treatment for COVID-19 at the Rajiv Gandhi Government General Hospital in Chennai and went missing on Friday night, is ye Source: thehindu.com Related