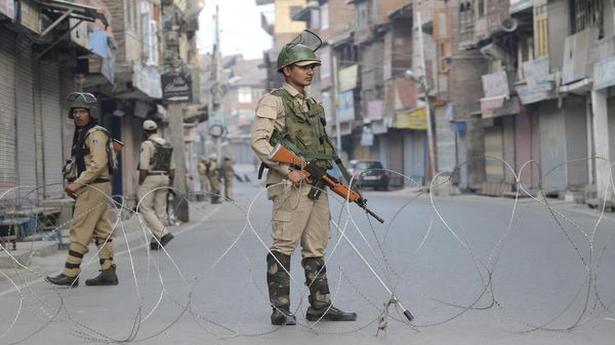 An exchange of fire took place between the Army and two suspected terrorists in a village along the Jammu-Kishtwar National Highway on Saturday, following which a massive search operation was launched in the area, officials said.

The terrorists fired at the quick reaction team of the Army after a driver of a civilian vehicle informed the force about the presence of two suspicious individuals on the highway in Batote of Ramban district, leading to a brief exchange of fire, they said. “Today (Saturday) morning at about 7.30 am, two suspicious individuals tried to stop a civilian vehicle at the general area Batote on the highway. The driver was alert, did not stop the vehicle and rushed and informed the nearest Army post,” an Army official said.

“The quick reaction team reacted promptly and contact was established with the suspicious individuals. An exchange of fire took place and further details are awaited,” he added.

The officials said that the terrorists hurled a grenade and followed it by firing soon after noticing the quick reaction team of the Army at Dharmund village.

Reinforcements from the Army and police have rushed to the spot and the whole area has been cordoned off to neutralise the suspected terrorists who tried to flee after the initial exchange of firing, they said.

There was no immediate report of any casualty in the incident.

The search operation is on and there was no fresh exchange of firing between the terrorists and the security forces.

The movement of the traffic on the highway was stopped following the incident as a precautionary measure, officials said.

A special meeting of the cabinet scheduled for July 27 will decide whether to impose a total State-wide lockdown in Kerala given the worrying spike in Source: thehindu.com Related

India has registered over 7.69 lakh coronavirus cases and more than 21,000 deaths till date. Source: thehindu.com Related