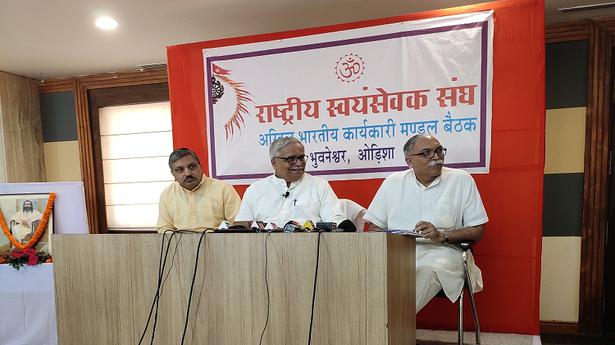 The Rashtriya Swayamsevak Sangh on Friday said it was expecting the court verdict in the Ayodhya case would go in the favour of Hindus.

“The Supreme Court has completed the hearing in the Ayodhya case. It has been our stand since long that all impediments for construction of Ram Temple should go. There was a legal issue as to who owns the land. Now, we are waiting for the court to deliver its judgment and everyone is expecting the verdict to come in one month,” said Suresh Joshi, RSS Sarakaryavah.

Mr. Joshi was addressing the media here at the end of the three-day-long Akhil Bharatiya Karyakari Mandal (ABKM) meeting, which was also attended by RSS chief Mohan Bhagwat.

“We will take a decision on our next course of action depending on the changing scenario following the court verdict. We are expecting that the court verdict will come in favour of Hindu society,” he said.

“Had the mediation yielded a result, the option of going to court would not have necessitated. We have come to such a pass that there is no hope of getting a solution through mediation. It would also have been fine for us if mediation had succeeded. Now, the court is hearing the case and the verdict should be acceptable to all,” Mr. Joshi said, adding that this was a matter of prestige for all and also that of the country.

‘Every country should come up with NRC’

When asked about the stance of the RSS on the National Register of Citizens, Mr. Joshi said, “Every country should come up with NRC. People should be identified on the basis of their Indian nationality. The NRC experiment has been carried out in Assam and it should be extended to the whole country.”

“The NRC is in the interest of the country. Those who are infiltrating into the country are not Indian nationals and should be identified as foreign nationals,” he said.

The RSS Sarakaryavah also said the government should make efforts without any sort of hesitation to implement the Uniform Civil Code, which was required for the development of the country. “The Uniform Civil Code should have been there in the Constitution when it was framed. If it was not done then, now necessary amendment should be brought in favour of the Code.”

Audit into the death of a 35-year-old man from Quthbullapur in Medhcal is still under way. On Tuesday, a corporate hospital issued his death certificate stating that he died due to ‘dengue hemorrhagic fever with shock and severe metabolic acidosis’. The Health Department staff found that his platelets count dropped to 13,000 before he died. […]

Prime Minister Narendra Modi and Union Home Minister Amit Shah on Thursday assured Assam Chief Minister Sarbananda Sonowal that the Centre will take into consideration Assam and its people while signing any accord with the Naga rebel groups to end insurgency in Nagaland. Mr. Modi and Mr. Shah gave the assurance when Mr. Sonowal called […]