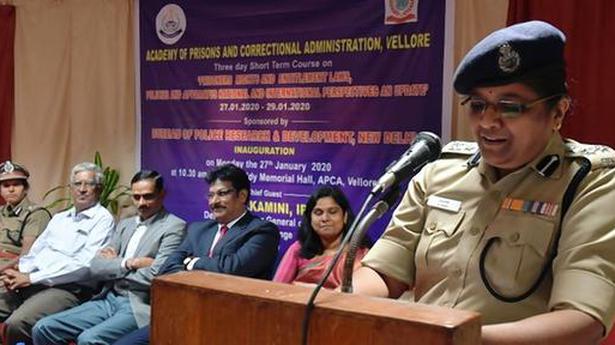 Though the prisoners do not have full constitutional rights, they are protected by the 8th amendment’s prohibition against cruel and unusual punishments at the hands of law enforcing officials, said N. Kamini, Deputy Inspector General of Police – Vellore range.

She was addressing the participants at the inauguration of three-day course on ‘Prisoners rights and entitlement laws, policies and apparatus-National and International perspective’ organised by Academy of Prisons and Correctional Administration in Vellore on Monday. The course was sponsored by Bureau of Police Research and Development, New Delhi and is aimed at providing an update on the subject through guest lectures, orientation programmes and interactive sessions.

In her address, Ms. Kamini explained the need and importance of protecting the rights of inmates who are under the custody of the State. She said that International Human Rights Laws protect people from discrimination and torture. “It also recognises the rights of specific groups of people, including women, children and people with disability, indigenous people and migrant workers. Some of these treaties are complemented by optional protocols that deal with specific issues or allow people to make complaints,” she said.

“The basic principles for the treatment of prisoners adopted and proclaimed by General Assembly Resolution 45/111 of December 14, 1990, is also remembered as Nelson Mandela Rules for the treatment of prisoners known worldwide,” she said. She added that the Supreme Court of India has said that the rights guaranteed by Article 21 are for every person and not even the State could deny that.

“Prisoners also have all the rights which a free man has under some circumstances and just being in prison does not deprive them of their fundamental rights,” she said. Director of APCA M. Chandrasekhar provided an insight on the Human Rights of Prisoners-Law of the Country, and Deputy Inspector General (DIG) Prisons R. Kanagaraj spoke on ‘Updates on International Covenants’.

Processed milk, including of major brands, have failed to meet the prescribed quality norm in 37.7 per cent of the total samples tested, according to a Food Safety and Standards Authority of India (FSSAI) study. In safety parameters too, 10.4% of the processed milk samples were non-compliant, much higher than 4.8% in raw milk. Adulteration […]

The holy hillock of Sabarimala witnessed heavy rush on the first day of the Onam festival on Tuesday. A large number of devotes from various parts of south India turned up at the temple to offer prayers. The rituals began with Tantri Kandararu Maheswararu Mohanararu performing the auspicious Ashtadravya Ganapati homom in the morning. A […]

C.S. Seshadri, a leader of Indian mathematics, passes away in Chennai

Seshadri began his career at the Tata Institute of Fundamental Research as one of the first batch of graduate students. Source: thehindu.com Related