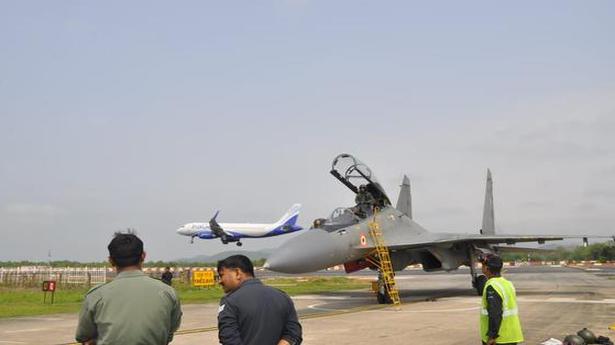 The Indian Air Force has focussed on air defence preparedness in the eastern and north-eastern sector with an eye on the country’s ‘eastern neighbour’.

On Wednesday night and Thursday morning, the IAF carried out a drill of its Sukhoi Su-30 jets from the civilian airport on the outskirts of Guwahati. It was the first-of-its-kind operation, also conducted in Kolkata and Durgapur in West Bengal, from civilian airports in the area of operation of the IAF’s Eastern Air Command, headquartered near Shillong.

“This is the first time that the Sukhoi SU-30 class jets are conducting drills from any civil airfield in the Northeast. From the western front earlier, we are now increasing our focus in the east since our eastern neighbour is increasing its capabilities, and we need to have a serious deterrent in order to emulate any threat that may emerge in the future,” Air Commodore Shashank Mishra, the head of the IAF station adjoining the airport, said. ‘Eastern neighbour’ is believed to be a reference to China which has reportedly increased its air assets in Tibet.

IAF officials said the first drill involving SU-30s in Guwahati was conducted at 9.30 p.m. on Wednesday. On Thursday, the jets flew out to the IAF’s base in central Assam’s Tezpur.

Officials said the drill was expected to give the IAF more flexibility for coordination with civil air traffic during an emergency. The idea is to let the fighter jet pilots familiarise with the operating procedure at the civilian airfields and get exposure to a different environment besides adapting to other factors that come into play.

In the eastern sector, Su-30s currently operate from military airfields at Tezpur and Chabua while the Hawk trainer jets are based at Kalaikunda in West Bengal.

Air force officials said some strategic air bases in the northeast would house the Apache and Chinook combat helicopters from the U.S. They added that the indigenous Tejas is expected to be based at West Bengal’s Hasimara from where the MiG-27s had been phased out.

The IAF has identified Guwahati, Aizawl, Kolkata, and Durgapur civilian airports for operating and validating fighter aircraft operations in the eastern sector.

Two personnel of the Army tested positive for COVID-19 on Sunday, taking the number of cases to three. They are a Colonel in Kolkata and a Junior Commissioned Officer in Dehradun. “Necessary contact tracing has been done, and the identified persons have been quarantined. The two affected persons are keeping good health, and their condition […]