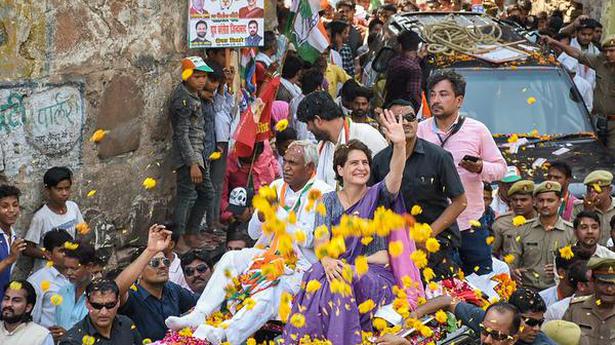 Seeking to woo voters ahead of the April 29 polling for the three out of four Lok Sabha seats in Uttar Pradesh’s Bundelkhand, Congress leader Priyanka Gandhi Vadra on Thursday held a roadshow in Jhansi, the second in two days in the region.

On the second day of her Bundelkhand visit, she held the roadshow in a busy commercial area of the city, sitting atop a vehicle in a violet saree and exchanging pleasantries with people lined up on both sides of the narrow and congested roads.

As young voters and Congress workers showered flowers on her cavalcade, she was greeted with slogans of “chowkidar chor hai” from the crowd at some places.

Ms. Priyanka Gandhi got off her vehicle and offered prayers at Gopal Mandir and Jain Mandir (at Gandhi Road). The roadshow covered almost a distance of 10 kilometres. Former Union Minister Pradeep Jai Aditya was also present on the occasion.

Mr. Shiv Sharan Kushwaha is Jan Adhikar Party founder Babu Singh Kushwaha’s brother, and the party has forged an alliance with the Congress.

Mr. Babu Singh Kushwaha, a former BSP Minister, was one of BSP chief Mayawati’s most trusted “backroom boys”, and a senior member of the Uttar Pradesh Cabinet.

On April 7, 2011, he was forced to resign after being implicated in the killing of two chief medical officers.

Jhansi is the largest town in Bundelkhand, a parched and underdeveloped hilly region spread over Uttar Pradesh and Madhya Pradesh.

Earlier on Wednesday, Ms. Priyanka Gandhi held a roadshow in Mahoba of the Banda constituency, which goes to polls on May 6 and an election meeting in Hamirpur, the voting for which will be held on April 29.

Focusing on the Bundelkhand region, she had also addressed a public meeting in Hamirpur, accusing the NDA government of pursuing anti-people policies.

“The Modi government is ignoring the poor, farmers and women. It is bothered only about the power,” she had said.

“What have you done in the past five years? What has happened to the promises made five years ago?” she had asked the BJP.

“Elect a government, a leader who is your hamdard [sympathiser],” Ms. Priyanka Gandhi had said.

During canvassing for the 2014 Lok Sabha election, BJP leader Uma Bharti too had promised a separate state of Bundelkhand within three years of her party coming to power. A similar promise was made by the Congress during the last general election.

All the four Lok Sabha seats were won by the BJP in 2014 with a massive 44.86% vote share. In the 2017 Assembly elections, the Samajwadi Party, Bahujan Samaj Party and the Congress were not able to dent the BJP’s support base here.

The BJP, in 2017, successfully carried on its momentum in Bundelkhand and bagged all 20 Assembly seats in the region.

The BJP had dominated the region throughout the 1990s. Beginning with the 1991 Lok Sabha election, the party won all the four Lok Sabha seats in Bundelkhand.

It won all, except Banda (BSP won this seat), in 1996 and again secured a landslide victory in the 1998 election.

However, the BJP’s domination witnessed a hiatus from 1999 till 2014 when the party made a comeback riding on the ‘Modi wave’.

We will forcibly take money from businessmen for NYAY: Rahul

In a sharp response to BJP leaders who termed the minimum income guarantee scheme (NYAY) promised by the Congress as something that could not be implemented, Congress president Rahul Gandhi hit back stating that his party, upon coming to power, would forcibly take money from the pockets of big businessmen who looted the country under […]

The Comptroller and Auditor General (CAG) of India, General and Social Sector, has faulted State Police Chief (SPC) Loknath Behera for violating the statutory guidelines established for ensuring fiscal probity in the procurement of equipment for modernising the force. The CAG report for the year ended March 2018, which was tabled in the Assembly on […]

A 11-month-old baby drowned in a bucket of water at Challissery near Kunnamkulam on Sunday. Mohammed Saddique, the child’s father, who had returned fr Source: thehindu.com Related