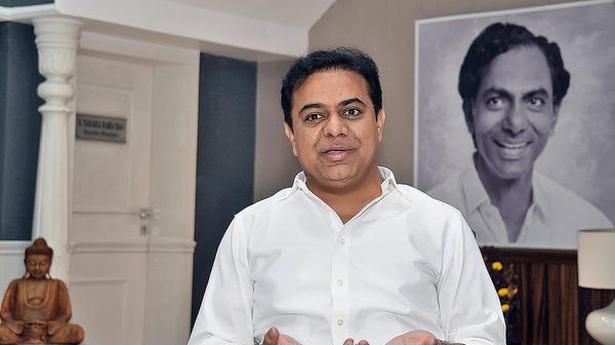 BJP is not willing to listen to farmers, blindly towing the line of corporates, TRS working president said.

Accusing the BJP government of being undemocratic, he said it was not willing to listen to the farmers and blindly toeing the line of corporates. He was speaking at a rasta roko at Burugula near Shadnagar in support of the Bharat Bandh called by the farmers’ organisations against the new farm Bills.

“Central Government passed the Bills using its brute majority without discussing with the Opposition parties and farmers organisations and in Rajya Sabha it did not even agree for voting despite lacking majority. The BJP lacks the democratic spirit,” he claimed.

Continuing his virulent attack on the new laws, he asked why the Central government was shying away from guaranteeing the MSP in the Bill itself which the farmers want. When 85% of farmers in the country are small and marginal, their only guard against exploitation is the MSP which the government is not willing to consider, he said. “Whom do they want to convince that the laws are good for farmers,” he asked.

He reminded that it was not just farmers’ loss but also the middle class as the prices of essential commodities are bound to spiral in the absence of government control. “Corporates will buy, stock, create artificial shortage and then make people pay the price they want,” he said.

On buying the fine variety paddy in Telangana, he alleged that the Food Corporation of India (FCI) was threatening the Telangana government with stopping procurement if the government announces a bonus to the farmers.

Mr. KTR said it was not a big issue to spend ₹1,000 crores to support farmers who have grown fine variety paddy but it was worried about the procurement which the FCI has threatened to stop if the bonus was announced in addition to the Minimum Support Price (MSP).

To avoid defections, Cong. may take affidavits from candidates

Defection of its MLAs to the ruling party is forcing the Congress to seriously consider taking affidavits from the contestants in the local body elections that they would not change the party once they get elected on the party ticket. Telangana Pradesh Congress Committee (TPCC) president N. Uttam Kumar Reddy indicated this at an informal […]

Actor Dileep filed a discharge petition before the judge who is trying the woman actor rape case to remove him from the list of the accused. The actor filed his petition on Tuesday. Lawyers of the actor continued their argument on the charge filed by the police in the case. The prosecution will present its […]