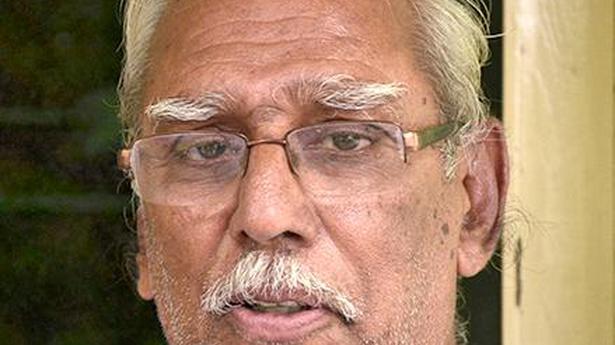 There is a need for two Irrigation Ministers in the State – one for the water surplus coastal districts and the other for the rainfall deficit Rayalaseema districts, according to Yerneni Nagendranath, president of the Rythanga Samakhya.

Mr. Nagendranath, who was former member of the Krishna-Godavari-Pennar River Basins Drainage Board, had spearheaded several farmers’ agitations and agrarian movements in the combined State.

Talking to The Hindu, Mr. Nagendranath said Chief Minister Y.S. Jagan Mohan Reddy had a formidable task of completing several irrigation projects that had been initiated by his father Rajasekhara Reddy under the prestigious Jalayagnam programme.

Since irrigation was an integrated subject, there often used to be confusion and wastage of resources in the execution of various categories of works. The TDP, which came to power post bifurcation, had scrapped all categories, purportedly for administrative convenience, and put all the water resources, including groundwater and water conservation, under one head. The Water Resources Department, by virtue of its nature, got a lion’s share of budgetary allotments. Mr. Nagendranath said instead of adopting the old system again, it would be better to have two Irrigation Ministers – one for the four Rayalaseema districts and the two relatively rainfall deficit coastal districts of Nellore and Prakasam, and the other for the remaining seven coastal districts that relatively have better rainfall and irrigation facilities. “The nature of water resources in the drought-prone districts of the State are very different from those available in the coastal districts. Leaders having an understanding of the different problems must be appointed as Ministers,” Mr. Nagendranath observed.

This would also help the farmers of the respective areas interact with the Ministers, he said.

The changing stance of the Indian Union Muslim League (IUML) on the Supreme Court verdict in the Ayodya case was unfortunate, and KPCC president Mullappally Ramachandran should clarify his party’s stance on the issue, said BJP State vice president Abdullakutty here on Tuesday. Addressing mediapersons in Kannur, he said initially the IUML had said it […]

Manipur CPI secretary arrested after being released on bail

Police re-arrested CPI State secretary L. Sotinkumar, on Saturday shortly after he was released on bail by the court of the Chief Judicial Magistrate, Imphal west. The Imphal west District Magistrate has clamped prohibitory orders under Section 144 of the Cr.PC. in the entire district with effect from Saturday night. Trouble has been brewing in […]

China on Friday objected to the visit of Defence Minister Rajnath Singh to Arunachal Pradesh, saying the Chinese government never acknowledged the “so-called” northeast Indian state, which it claims to be a part of South Tibet. Mr. Singh visited Tawang on Thursday for the ‘Maitree Diwas’ celebrations to boost civil-military friendship in the region bordering […]