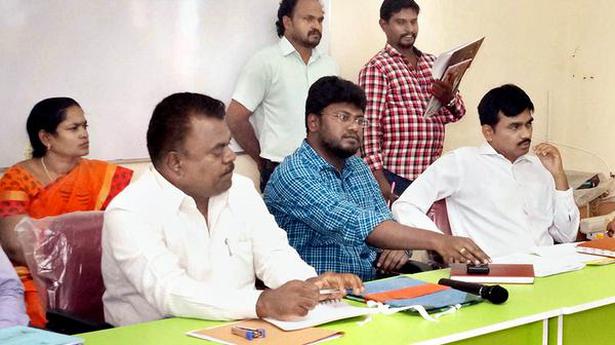 Demanding timely issue of grazing permits, members of farmers’ organisations staged a protest during a special grievance meet convened by the Forest Department here on Friday.

According to the farmers, they had been complaining that there was an inordinate delay in issuing permits for grazing cattle inside reserve forest areas. Forest officials said the process was being streamlined this year to protect the reserve forests from overgrazing and hence the delay.

The officials said leaders of the farmers’ associations own a huge number of cattle and only they got benefited from the permits. “Every association leader owns hundreds of cows and bulls and they demand that the permits should be allotted to them. We want to identify individual cattle owners and issue permits to them, instead,” said S. Gowtham, District Forest Officer, Theni division.

The officials said they received applications for over 18,000 cattle so far for grazing in Theni and Meghamalai divisions. “We can’t issue that many permits as we have to protect the plantation areas also inside reserve forests. This year, we have also made it mandatory that an immunisation certificate from the Animal Husbandry Department must be produced for issuing permits. Insurance cover was also made compulsory, so that in case of cattle death due to wild animal attack, the farmers can get compensation,” said Sachin Bhosle, Wildlife Warden, Meghamalai division. However, since the farmers were against taking insurance cover, the norm had been lifted, he said.

At the meeting, a couple of farmers from Varushanadu area demanded right of way for all vehicles in hamlets such as Bommarajapuram. The officials replied that as per Wildlife Protection Act, only one-metre-wide right of way could be provided to facilitate movement of two-wheelers. “We have restricted movement of four-wheelers to hamlets in the forest area since May. In Bommarajapuram, there are about 60 families of which only 20 people have patta land. As it is located in a core elephant movement area, we have restricted the right of way,” added Mr. Bhosle.

He added that 31 people living in Palayankudi village in Gudalur range of Meghamalai division had been given patta titles under the Forest Rights Act, last year.

After the officials assured that the grazing permits would be issued within a month, the protesting farmers dispersed.

KKR on ED action: Rose Valley sponsored players’ jersey, no other dealings with them

IPL franchise Kolkata Knight Riders (KKR) has denied any financial dealings with the controversial Rose Valley Group, except for it being a sponsor of the side’s official jerseys in 2012 and 2013. KKR issued the clarification after the Enforcement Directorate (ED) attached Rose Valley’s assets worth over ₹70 crore on Monday. The attached assets include […]

Two parliamentary panels headed by Congress leaders have decided to examine the WhatsApp snooping case and will seek details from top government officials including the Home Secretary. Facebook-owned WhatsApp on Thursday said Indian journalists and human rights activists were among those globally spied upon by unnamed entities using an Israeli spyware Pegasus. Describing the entire […]