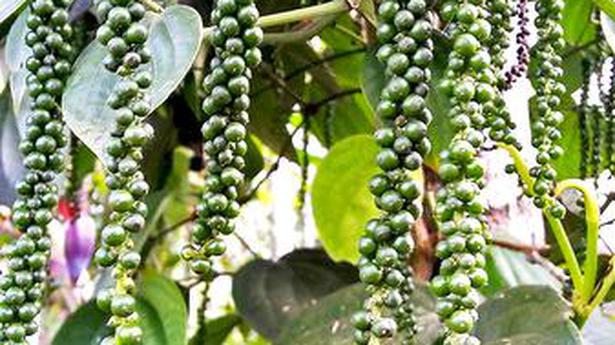 A drastic fall in the price of black pepper and low production owing to climate vagaries, are the major concerns of farmers in Kerala and Karnataka, the two major pepper producing States in the country.

The spot price of pepper in Kerala’s Wayanad and Karnataka’s Coorg markets on Wednesday was ₹ 285 a kg as against ₹390 a kg during the corresponding period last year.

“The influx of imported pepper from Vietnam via Sri Lanka is the major reason for the fall in prices in the Indian market,” said M.C. Abdu, a pepper dealer in Wayanad, told The Hindu.

The cheaper pepper from Vietnam continues to flood the market through Sri Lanka, aided by a low-duty structure under the ASEAN (Association of South-East Nations) trade agreement, SAFTA (South Asian Free Trade Area) and ISFTA (Indo-Sri Lanka Free Trade Agreement). Under SAFTA, India could import 2,500 tonnes of pepper a year from Sri Lanka without duty, and above the quota, a duty of 8% would be imposed as per the ISFTA, Mr. Abdu said. But direct pepper import from Vietnam attracted a duty of 52% under the ASEAN trade agreement.

Though the Union Ministry of Commerce and Industry had fixed the minimum import price (MIP) for pepper at ₹500 a kg in December 2017 to protect the pepper farmers in the country, it was being widely flouted by some pepper importers with the support of unscrupulous Sri Lankan pepper exporters violating RBI and FEMA regulations, said Kishore Shamji Kuruwa, the Cochin chapter head of the Indian Pepper and Spice Traders, Farmers, Producers and Planters Consortium (IPSTPC).

While the pepper prices in Indian market were ruling around ₹290 a kg, why were the importers procuring the produce at ₹500 a kg MIP plus 8% import duty from other countries, Mr. Kuruva asked.

As much as 1,600 tonnes of pepper was imported into India in August and September this fiscal for domestic use. Intervention by the Union government was needed to protect the interests of the pepper farmers in the country, he said.

The peak power demand on the system crossed the 12,000 MW barrier in Telangana for the first time on Monday morning as the consumption of energy by the agriculture and irrigation sectors zoomed as part of the ongoing rabi cultivation operations. According to the energy officials, the previous highest demand on the system was eclipsed […]

Jyotiraditya Scindia says no party will get majority, Congress will forge alliance for ‘UPA plus plus’ govt

Predicting that no single party will get a majority in Election 2019, Congress leader Jyotiraditya Scindia says his party will forge a strong alliance of like-minded entities to create a “UPA plus plus” government at the Centre and end five years of “injustice”. The days of coalition governments are here to stay, the Congress general […]