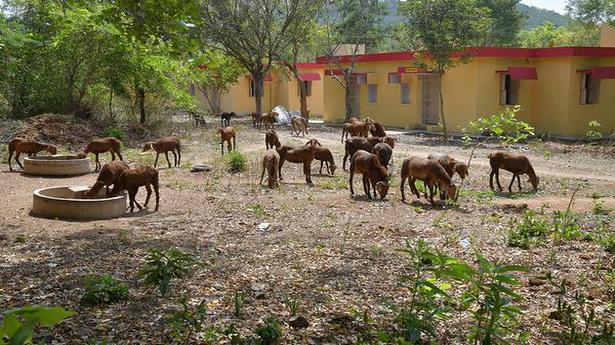 The Animal Husbandry Department has provided varieties of sheep to farmers with the aim of creating more opportunities to increase their livelihood through self-employment.

The Mukundarayapuram Sheep Farm, located on the foothills of Kanchanagiri near Lalapet in Ranipet, maintains around 300 Madras Red Sheep breed for this purpose.

Fodder crops are maintained on around 479.65 acres in the specially created farmland close of the Animal Husbandry Inspectors’ Training Centre. Farmers can buy sheep at rates fixed by the government from here.

According to official sources, there are 12 shepherds identified from nearby villages working in the farm, who provide every aspect of healthcare by monitoring the animals closely.

There are support staff to attend to the issues in the centre as well to the needs of animals. In case of an emergency, the animals would be shifted to a veterinary hospital in nearby Ranipet, they said.

Officials said the efforts taken by the Animal Husbandry Department supplemented the income of small and marginal farmers and landless labourers. It generated gainful employment opportunities, especially self-employment, to a substantial part of rural and urban population, many of whom were women who played major roles in the care and management of livestock, they said.

With dedicated and sustained effort, the department implemented various beneficiary-oriented programmes and fostered judicious utilisation of animals and the natural resources in an eco-balanced way. As a result, the cattle and livestock sector of the State has been elevated to a prominent position, the officials added.

An official said above one-year-old sheep fetched ₹250 per kg and those below one-year fetched ₹300 per kg.

Fodder crops like Napier grass are grown in around 15 acres, while other grass varieties are also grown in the farmlands by the Animal Husbandary Department and fodder such as Agathi, Kalayanamurungai, Neem, Glyricedia, Camellia are grown in around in 5 acres. The farmers are supplied fodder slips and seedlings for fixed rates by the government on demand.

Clusters contribute to surge in COVID-19 cases in Kottayam

Another death has been reported in Karnataka taking the total deaths to 17. An 80-year-old, who died in Kalaburgi on Monday, has tested positive. The reports came early on Tuesday morning. Health Minister B Sriramulu has confirmed this in a tweet. The deceased had been suffering from Parkinson’s for the last three years. Source: thehindu.com […]