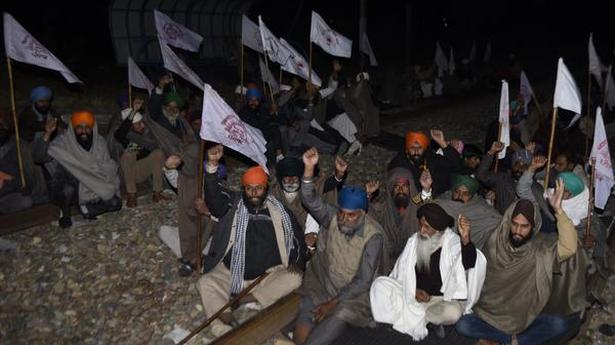 Road and rail blockages in T.N., mass march to Raj Bhavan in Ranchi and a rural strike or hartal in many States planned.

The Union Agriculture Ministry has invited Punjab farmer leaders to come to Delhi for continued talks on December 3, even as all-India farmers groups gear up to launch an “indefinite siege” of the capital from November 26 onwards, in protest against the three controversial agricultural reform laws and a proposed Electricity Bill, 2020.

Over one lakh farmers from Punjab alone are expected to come to Delhi with their tractors and will stay until their demands for repeal of the three laws have been heard, said leaders of the All India Kisan Sangharsh Coordination Committee at a press conference on Tuesday.

“After the extended discussion on the problems of farmers held on November 13, it was decided that this dialogue would be continued. The Union Minister for Agriculture and Farmers Welfare, Shri Narendra Singh Tomar, again invites you for the next round of discussion at 11 a.m. on December 3 in Vigyan Bhavan in New Delhi,” read the invitation sent to 32 protesting groups by acting Agriculture Secretary Sudhanshu Pandey on Tuesday.

The round of talks held earlier this month ended inconclusively, but most farmers groups later agreed to end their rail roko protest. However, when the Railways resumed services, one farmers group continued to block the tracks on Tuesday, preventing a passenger train from plying, potentially returning to the stalemate in the State.

“In principle, Punjab farmers groups are not against talks with the government. But it needs to be held in a congenial atmosphere. We condemn the crackdown of the Haryana government against farmer leaders there,” said Krantikari Kisan Union president Darshan Pal, who is also a member of the AIKSCC’s national working group. “Our participation in the talks will depend on what happens on November 26 and 27.”

The Hindu Explains | Who gains and who loses from the farm Bills?

The AIKSCC, a platform of more than 300 farmers groups along with the 32 Punjab groups, had issued a call for “Delhi Chalo” to demand the repeal of the three new laws, which they feel will dilute the system of government procurement of farm produce at minimum support prices, and benefit corporates rather than small farmers. The Centre says the laws will reform the agricultural marketing system and provide new choices and opportunities for farmers across the country.

State leaders of the AIKSCC, some of whom spoke from vehicles on the way to Delhi, detailed plans for protest across the country, including 500 road and rail blockages in Tamil Nadu, a mass march to the Raj Bhavan in Ranchi, and a complete rural strike or hartal in Maharashtra, West Bengal, Andhra Pradesh, Telangana and parts of Karnataka and Odisha. Trade unions and some retail unions have also promised to support the agitation.

It is the States surrounding Delhi, however, that plan to send thousands of farmers with their tractors and trolleys on the nine roads leading to the capital. “Lakhs of farmers are mobilising to come, and they will be prepared to stay as long as it takes,” said AIKSCC working group member Kavitha Kuruganti.

“The police have denied us permission to use Ram Leela Maidan or Jantar Mantar for rallies, and they are putting up barriers at the Delhi borders to prevent entry. We will sit down wherever they stop us, and hold our protest. Bedding and rations are being packed into the tractors, langar committees are being set up. We expect 1.5-2 lakh farmers from Punjab alone, plus thousands from Haryana and western U.P.,” said Dr. Pal.

All India Kisan Mazdoor Sabha’s Ashish Mittal said the authorities were using the pandemic as an excuse to prevent the farmers from exercising their legal right to protest. “The government is misusing COVID and trying to blame farmers for COVID and not taking care. COVID will affect a small number of people but generations of farmers will be affected by these laws,” he said.

Wildlife Society of Orissa, an environmental pressure group, demanded that all seized and rescued pangolins kept in Nandankanan Zoological Park (NZP) be released into the wild. “The Indian Pangolin is an endangered species whose wild population has fallen in the last one decade due to relentless poaching and trade. In 2009, the NZP started a […]

The Northeast Frontier Railway Construction Organisation has built India’s tallest railway pier bridge — 100 m tall equivalent to a 33-storey building, across river Makru in the Tamenglong district of Manipur. The ₹283.5-crore bridge with a span of 555 m is part of the 111-km Jiribam-Tupul-Imphal new broad gauge line. It has 47 tunnels, the […]

Nearly 25 patients at the Institute of Mental Health (IMH) have tested positive for COVID-19 in the last few days. A majority of them are from a singl Source: thehindu.com Related