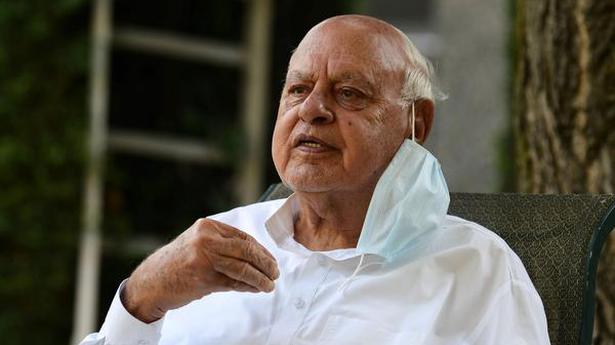 Neither my house in Srinagar nor in Jammu is on the land got under the Act, says NC president

The Bharatiya Janata Party (BJP) on Tuesday said National Conference (NC) president Farooq Abdullah and his relatives were among the beneficiaries of the now-nullified Roshni scheme. However, the NC has denied these allegations.

“The list [of beneficiaries] made public after the High Court directions has shown Dr. Farooq Abdullah, his family members and the party leaders occupying land under the Roshni Act, 2001. The NC’s twin offices spread over 3 kannal and 16 marlas each in Srinagar and Jammu were also regularised under the scheme. The scheme seems to have lit up the houses of these politicians rather than poor people,” BJP leader and Union Minister Anurag Thakur told media in Jammu.

Describing the scheme “not only J&K’s but India’s biggest scam”, Mr. Thakur said it was launched to collect ₹25,000 crore by vesting the ownership to occupants to set up hydel projects.

“How many hydel projects have come up? Instead, these rulers who looted the resources of J&K for many decades would purchase a small plot and then encroach State and forest land and get it regularised under a systematic legal cover passed through the Assembly,” Mr. Thakur said.

Dr. Abdullah denied these allegations and the J&K administration’s listing of his properties. “Neither my house in Srinagar nor in Jammu is on the land availed under Roshni Act,” he said.

NC vice-president Omar Abdullah said, “The news attributing to sources that Dr. Abdullah is a beneficiary of the Roshni Act is completely false and is being spread with a malicious intent. He has not availed of the scheme for either his residence in Srinagar or in Jammu and any one who says otherwise is lying,” he said.

The J&K administration has released a list of 31 beneficiaries of the scheme, introduced in 2001 to regularise the land leased out to locals since the 1930s. It included local politicians, hoteliers, traders and a former bank chairman.

Former J&K Finance Minister Hasseb Drabu, whose name is also among the beneficiaries, said, “The land shown in the list is the one I inherited from my mother. My mother inherited the land from her father who purchased it in the 1950s. Where is the scam? It’s the media creation.”

The list comes as J&K is preparing for its maiden District Development Council (DDC) polls, starting from November 28.

Dr. Abdullah, who is under self-quarantine after a close associate reported COVID-19 positive, released a video message on Tuesday, in which he made a fervent appeal to voters to come out in large number for the candidates fielded by the Peoples Alliance for the Gupkar Declaration (PAGD).

“I appeal to people to come out in large numbers and vote for the alliance candidates. This alliance was formed to restore our identity, restore the statehood and that which was taken away from us, the Articles 370 and 35-A,” he said.

Coronavirus | In Howrah, BJP to distribute homeopathic drug for immunity-building

Over 70% turnout in first phase poll to Bodoland council

More than 70% of the 1,365,207 voters turned out for the first phase of the elections to the Bodoland Territorial Council (BTC) in Assam on Monday. The elections to the 40-seat council have been billed as the “semi-final” before the 2021 Assembly polls, and its outcome could decide the fate of alliances. “By 3:30 pm, […]

She recalled Mukherjee’s personal support for her and her family particularly during her life in exile in India after the August 15, 1975 coup in Bangladesh. Source: thehindu.com Related