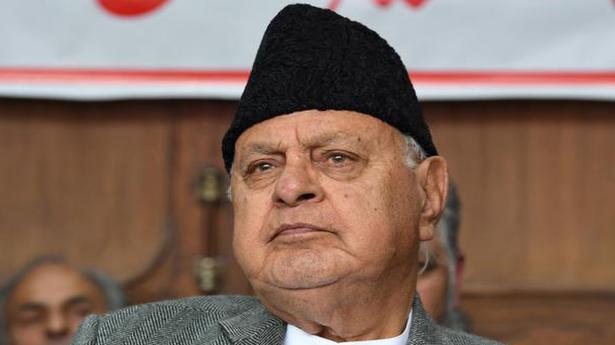 A request of former Chief Minister and National Conference (NC) patron Farooq Abdullah to offer Id-ul-Azha prayers in a mosque was turned down by the authorities, according to his family members.

A close relative of Dr. Abdullah, who wished not to be named, told The Hindu that Dr. Abdullah was “barred” from Id prayers despite “a formal request made to the authorities.”

The family member claimed that no one was allowed to meet Dr. Abdullah, who lives in Gupkar Road in Srinagar.

Union Home Minister Amit Shah had said that Dr. Abdullah was not under house arrest.

The government had stated that all incarcerated leaders, including MP Dr. Abdullah, his son and NC vice-president Omar Abdullah and Peoples Democratic Party (PDP) president Mehbooba Mufti and her party leaders, were allowed to pray.

The Additional Director General of Police, Law and Order, Muneer Khan, said it was the district magistrates and local officials who assessed the situations in their areas to maintain law and order.

“A few minor localised incidents have been dealt at local levels.” The government had given further relaxation in prohibitory orders in many areas of the Kashmir Valley. “The main focus of the administration is on a smooth celebration of Independence Day,” he added.

The Supreme Court on Friday asked the Central Bureau of Investigation to reply to a plea by Rashtriya Janata Dal president Lalu Prasad Yadav for bail in three cases related to the multi-crore fodder scam. A Bench headed by Chief Justice Ranjan Gogoi issued a notice to the investigative agency and posted the case after […]

National SC Commission member K. Ramulu on Friday said the Citizenship (Amendment) Act (CAA) reflected the unity and integrity of the country. The Act, which was recently passed in Parliament with an intention to build ‘Akhanda Bharat’, was being welcomed by the Hindu society at large, he claimed. “But some forces with vested interests are […]

The Odisha Human Rights Commission (OHRC) has directed the State government to sensitise officials on disposing unclaimed human bodies with dignity. The Standard Operating Procedure and government guideline prepared for disposal of human bodies should be followed by line departments including Health and Family Welfare and State police, said a division bench of OHRC comprising […]