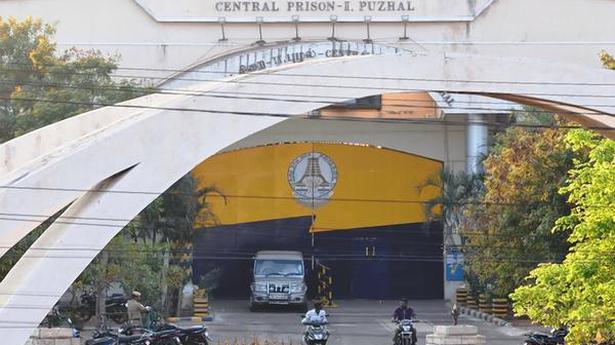 A year after the State government decided to grant general amnesty and release over 1,800 life convicts lodged in central prisons across Tamil Nadu on the occasion of the birth centenary of former Chief Minister M.G. Ramachandran, the fate of around 100 such inmates remains uncertain, as the Tamil Nadu government is yet to send the files recommending their premature release to Governor Banwarilal Purohit.

The impending Parliamentary election may delay the process further. The current situation has arisen amid mounting pressure on Raj Bhavan from various quarters, since the Governor has not taken any decision on the State Cabinet’s proposal to grant remission of sentence and release all the seven life convicts in former Prime Minister Rajiv Gandhi’s assassination case.

According to sources in the Prison Department, the files of around 100 life convicts had not been sent to the Governor’s office for various reasons. The files include those pertaining to convicts in some sensational cases, including the Melavalavu massacre in Madurai district in 1997, where six Dalits were murdered by a group of Caste Hindus.

As part of the MGR birth centenary celebrations, the State government decided to grant general amnesty and issued an order stating that life convicts who had completed 10 years of imprisonment and those aged 60 years and above who had served five years in prison as on February 25 will be eligible for premature release. However, prisoners convicted on charges of terrorist crimes, offences against the State, sedition, rape, robbery and dacoity were declared ineligible.

Some inmates, who had spent more than 25 years in prison, were keeping their fingers crossed, given the indefinite delay. One of the possible reasons for the delay, sources said, was that the prison officials had not recommended or given a dissent note on some files.

For instance, the Governor’s office had returned the files relating to the premature release of three life convicts in the Dharmapuri bus burning case on two occasions. However, top State officials met the Governor to explain the merits of the case and finally got his approval to release the trio, sources said.

Acting on the recommendation of the State, the Governor is empowered to grant pardon under Article 161 of the Constitution, which states: “The Governor of a State shall have the power to grant pardons, reprieves, respites or remissions of punishment or to suspend, remit or commute the sentence of any person convicted of any offence against any law relating to a matter to which the executive power of the State extends.”

Besides the Melavalavu case, the file pertaining to John David, who was convicted of the gruesome murder of Pon. Navarasu, son of former Madras University Vice-Chancellor K. Ponnuswamy, in the Annamalai University hostel in 1996, is also on the list.

Prison officials said the MGR centenary celebrations were over and there was no indication that the State authorities were processing the release of the 100-odd life convicts. It is possible that these files could be taken up for general amnesty, which is granted on the occasion of the birth anniversary of leaders like former Chief Minister Annadurai, or the State may consider issuing a new Government Order.

A Forest Department official said that the government had released an interim compensation of ₹50,000 to the victim’s family Source: thehindu.com Related

TDP leader, 5 others from Anantapur injured in Sri Lanka blasts

A prominent businessman S.R. Constructions Managing Director Alimineni Surendrababu and five of his friends, who had gone to Sri Lanka on a holiday trip, narrowly escaped from a blast in Shangri-La Hotel, in Colombo on Sunday. While Mr. Surendrababu was injured in his nose, two of his friends too received minor injuries while they were […]

Chief Minister Pinarayi Vijayan has said the two CPI(M) workers arrested by the police under the Unlawful Activities (Prevention) Act (UAPA) are Maoists. They were arrested while allegedly distributing Maoist pamphlets in Kozhikode. “They are Maoists and not CPI(M) workers. It is very clear,” the Chief Minister said in reply to a question at a […]