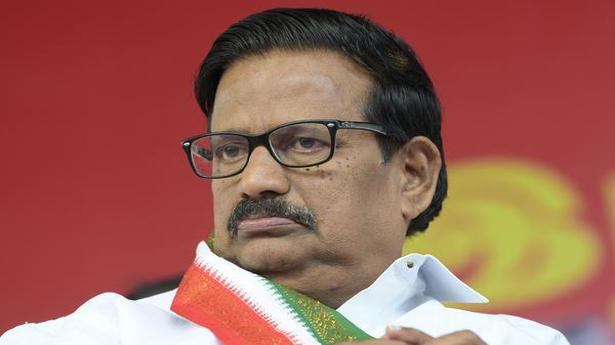 “Instead of speaking about his achievements to seek votes, the PM has started attacking my party president Rahul Gandhi by spreading canards about him and his family,” he told journalists.

The Prime Minister has used the armed forces for political gain, Mr. Alagiri charged and asked why the Central Government did not airlift the CRPF personnel, who were killed in Pulwama, Kashmir.

Taking on BJP State president Tamilisai Soundararajan, the Congress leader said the then Home Minister P. Chidambaram had visited the State after the ‘Thane’ cyclone but no high ranking BJP leaders did anything for the State after ‘Gaja’ cyclone.

The AIADMK’s move to act against three of its MLAs was undemocratic and in this act the Chief Minister Edappadi K. Palaniswami had joined hands with Mr. Modi, he alleged.

Prior to Mr. Alagiri’s arrival at the airport here skirmishes broke out between supporters of working president Mayura S. Jayakumar and district president V.M.C. Manoharan as the security personnel allowed only Mr. Jayakumar to enter the airport.

Congress leader Rahul Gandhi on Saturday condemned the mob attack on Nankana Sahib Gurdwara in Pakistan, saying “bigotry is a dangerous, age old poison that knows no borders”. Taking to Twitter, Mr. Gandhi termed the attack reprehensible, and said the only known antidote to bigotry is love, mutual respect and understanding. “The attack on Nankana […]

The Odisha government would compensate 8,000 fishermen families who would bear losses due to the fishing ban imposed for protection of the endangered Olive Ridley sea turtles. The annual fishing ban would be in force from November, 2019 to May 31, 2020 during which lakhs of turtles would arrive at the Odisha coast for mass […]

No member of his family has tested positive nor do they have travel history Source: thehindu.com Related