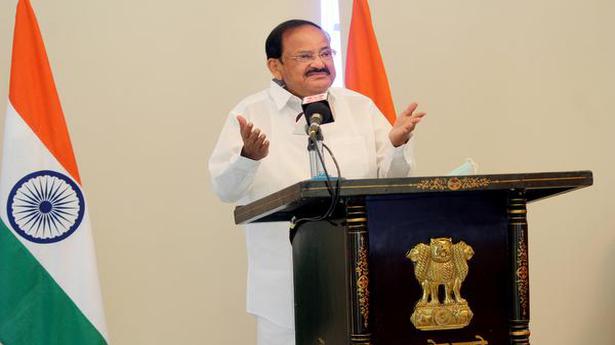 Underlining that none of the three organs of the State can claim to be supreme as only the Constitution is paramount, Vice President M Venkaiah Naidu on Wednesday said some court verdicts gave a distinct impression of the judiciary’s overreach.

He said the legislature, the executive and the judiciary are bound to work within their respective domains as defined in the Constitution.

Addressing the 80th All India Presiding Officers’ Conference on “Harmonious Coordination between Legislature, Executive and Judiciary – Key to Vibrant Democracy”, Mr. Naidu said harmony lies in each organ doing its job without interfering with that of the others.

This warrants a spirit of mutual respect, responsibility and restraint. Unfortunately, there have been several instances of crossing the boundaries, he said.

Mr. Naidu said there have been quite a few judicial pronouncements that gave a distinct impression of an overreach.

Citing some instances, he said it is not desirable for the judiciary to be perceived as acting as the “super executive” or the “super legislature“.

Mr. Naidu said, “Since independence, the Supreme Court and the high courts have delivered several far-reaching verdicts in furtherance of socio-economic objectives, besides making correctional interventions. But occasionally, concerns have been raised as to whether they were entering the domains of the legislative and executive wings.”

“There have been debates as to whether some issues should have been more legitimately left to the other organs of the government,” the Vice President said.

The higher judiciary deciding on Diwali fireworks, denying the executive any role in the appointment of judges through collegiums, invalidating the National Judicial Appointments Commission Act seeking to enforce accountability and transparency were some of the instances cited by Mr. Naidu.

“At times, the legislature too has tended to cross the line. The 39th Constitution amendment placing the election of President, Vice President and Prime Minister beyond the scope of judicial scrutiny in the circumstances in 1975 is one such instance,” he said.

A CRPF jawan was injured on Friday when a pressure bomb placed by naxals went off in Chhattisgarhs insurgency-hit Bijapur district, police said. The incident took place early morning near Tarrem village under Basaguda police station when a team of CRPF’s 168th Battalion was out on an area domination operation, Bijapur Superintendent of Police Divyang […]

The multipurpose Assamese gamosa, a ubiquitous, white cotton towel, has been assigned a new function — conservation of rare freshwater turtles. Few cultural symbols are as utilitarian as the white handmade cotton gamosa, with its characteristic red border of woven motifs. It is valued as a gift for visitors, used as a scarf, anti-dust mask, […]

The ADGPI, the army’s public relations wing, has declined to comment on reports over Depsang. Source: thehindu.com Related