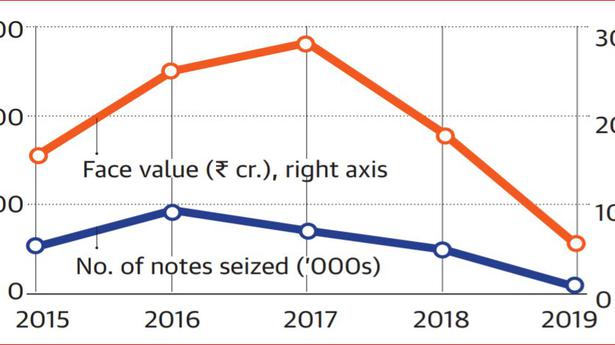 The number of seized counterfeit currency notes and the cumulative face value of these notes declined from 2015 to 2019 (Up to 18/6/2019. Data given for January to December of each year), according to an answer given during the Lok Sabha Question Hour.

Delhi accounted for the highest quantum of fake currency notes seized between 2015 and 2019. The ₹500 note is the most counterfeited note in terms of numbers.

Decline across the board

The year 2017 (after demonetisation) saw a dip in the number of fake currency notes but an upsurge in the face value of notes seized. Consequently, the number of First Information Reports against those in possession of fake currency also declined. Damage to the monetary stability of India by way of production or smuggling or circulation of high quality counterfeit currency is a terrorist offence, the maximum punishment for which is life imprisonment.

Apart from the national capital, Gujarat and West Bengal registered the highest quantum of fake currency seized in the past five years.

Though Gujarat topped the cumulative list, it registered a huge decline (86.31%) in the value of fake currency notes seized in 2018 compared to 2017.

Fake ₹1,000 notes continued to be seized post-demonetisation, and accounted for the second-highest number of counterfeit notes in five years after the 500s. The number and face value of fake ₹2,000s seized were high despite being introduced later.

In a bid to inculcate a scientific temper among children from economically disadvantaged backgrounds and stimulate inquiry-based teaching in the country’s rural hinterland, a Pune-based educationist has come up with a series of animated science videos. The series aims at demolishing language barriers to make everyday science comprehensible and accessible to such children. The 36 […]

Markets in Chennai and Madurai saw thousands of residents gather to buy vegetables and groceries, many of them flouting physical distancing norms Source: thehindu.com Related