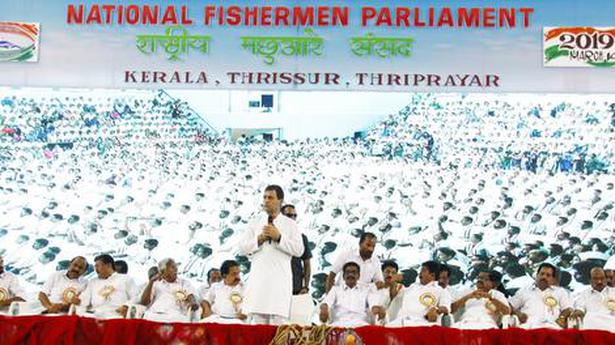 Congress president Rahul Gandhi wanted the youth of the country to ask the Prime Minister Narendra Modi on who was funding his marketing exercises and paying for his advertisements in televisions and newspapers.

Mr Modi is being marketed by 15 industrialists of the country and the Prime Minister in turn is protecting their interests and allowing them to steal the land and properties of fishermen, alleged Mr Gandhi, while interacting with the delegates of the national fishermen parliament that was held here on March 14.

All the major ports in the country are now owned by the friends of Prime Minister Narendra Modi. The industrialists are taking away the land of the fishermen. They are returning the favour by taking care of the marketing of Mr Modi, he alleged.

When the Congress returns to power, it will enact legislation to ensure 33% reservation for women in the Parliament and the legislative assemblies and jobs in the country. A separate ministry for fisheries will be set up at the centre for taking care of the needs of fishermen of the country and to address their issues, he said.

Focusing his attention on the youth and the issue of unemployment, Mr Gandhi wanted the youth to find out how many jobs, the industrialist Anil Ambani, who had received ₹35,000 crore from the Indian banking sector, had created. If you give ₹35 lakh to a young entrepreneur from Kerala, he will generate more jobs, he said.

For the youth and the fisherman to get jobs, they should get access to the Indian banking sector, he said.

Mr Modi was protecting the interest of Nirav Modi, Anil Ambani and Choksi. He was also instrumental in allowing these industrialists to capture the Indian banking sector, he said. No Finance Minister of the Congress will hold a discussion with Vijay Mallya in the Parliament before him escaping the law and escaping from the country, taking a dig at Finance Minister Arun Jaitley.

While the fishermen, the youth and the small time traders of the country will have to shout to make their voice heard, the industrialists need to just whisper and their voices will reach the Prime Minister in no time.

Mr Gandhi also reiterated the earlier promise to ensure a minimum income for all the citizens of the country to wipe out corruption.

He also released the manifesto prepared by the fishermen parliament.

The senior Congress leaders from the State, including KPCC president Mullappally Ramachandran and AICC general Secretary Oommen Chandy and Opposition leader Ramesh Chennithala who were present at the meeting, chose not to speak.

Following clashes between students of Jamia Millia Islamia and Delhi Police late on Sunday, December 15, protests erupted in college campuses across the country, condemning police action against the students. Students across the country, from Jawaharlal Nehru University in Delhi to Pondicherry University, staged demonstrations. The following is a map with the campuses where demonstrations […]